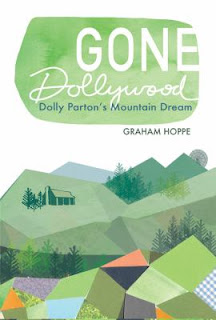 Reviewed by Christy
In Gone Dollywood: Dolly Parton’s Mountain Dream, Graham Hoppe analyzes not only the East Tennessee theme park but also what it means to be Southern (more specifically Appalachian) and how that identity is commodified for mountain tourism.
I was surprised to learn that Pigeon Forge and the Gatlinburg area didn’t become a tourist hot spot with the development of Dollywood in 1986. Rather, it was a vacation destination even pre- Civil War, the cooler mountain air attracting the elite during the summer months. Often the proto-tourists would view the locals with a sort of bemused condescension which Hoppe uses as a segue into a discussion of the “hillbilly” stereotype. Hoppe argues one of the reasons Parton is so successful is that though she plays with the hillbilly trope (calling herself “white trash” and leaning into a Daisy Mae aesthetic), she doesn’t do it with a sense of superiority but one of camaraderie with her people.
Hoppe doesn’t solely focus on Parton or even Dollywood. He talks about the kitschy-ness of Pigeon Forge and Gatlinburg and even gets into a little history about Cracker Barrel (a chain restaurant which started in Tennessee but tends to shy away from identifying as a “Southern” restaurant, favoring the more general “down home” or “country” brand) and more locally owned establishments like Gatlinburg’s Pancake Pantry. Hoppe tries to peel back the layers of these entities and more to see just what version of the South they’re trying to sell.
Though the focus is a little scatter shot at times, this book comes in at under 150 pages so I don’t think a deep dive was ever the point. It seems he just wanted to open up discussions on the Southern image and how it’s sold. Dollywood, for example, is a very genteel, nostalgic, and family friendly version of Appalachia. A far cry from the bootleggers and white trash that might be presented at a nearby dinner show. The South, it seems, is multi-faceted. I’m glad Hoppe didn’t limit his attention to just Dollywood. I really enjoyed this look at the regular vacation spot for so many East Tennessean families.
Posted by BPL Ref at 9:00 AM