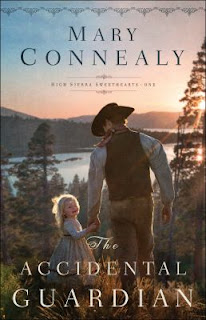 More romances to tickle your fancy and make your heart go pitter-pat!  This time, I decided to review some historical romances, which are just as delightful as any contemporary romance novel I’ve met.

In The Accidental Guardian, Mary Connealy introduces Trace Riley, a rancher who has been living off the trail for years, and Deborah Harkness, survivor of a horrific wagon train attack.  Trace knows what it’s like to lose loved ones at the hands of bandits and he’s not about to let Deborah, or her sister and their young charges, suffer in the wilds like he did.  But every day they spend together, Deborah and Trace grow closer, even as their time grows short.

I read one of Connealy’s novels—Out of Control—several years ago, but, at the time, I felt a little ambivalent about her work and I remember just skimming through the story.  The Accidental Guardian, however, was a pleasant surprise.  Admittedly, it can be a rather predictable story and it sometimes falls prey to familiar western tropes, but it was a decent novel.  I liked the characters and I loved the setting.

I probably wouldn’t reread it; however, I would look at reading the next books in the series:  The Reluctant Warrior and The Unexpected Champion. 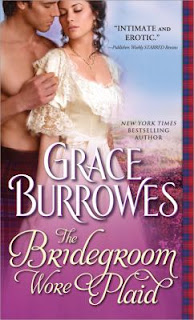 The Bridegroom Wore Plaid by Grace Burrowes tells the story of Ian MacGregor, a Scottish earl with a foundering estate, and Augusta Merrick, a penniless relation of the English heiress he’s destined to marry.  Despite Augusta’s better inclinations, she finds herself falling for the Scottish laird and enjoying the Highlands of his home.  She knows they can’t possibly be together, not when he so badly hopes to support his family, but, as they grow closer, Augusta discovers she wants to fight for happiness with Ian…even if it puts her at risk.

I love Grace Burrowes.  I know it isn’t an incredibly accurate historical account, just like I know that it falls prey to familiar romance novel clichés.  Likewise, I’m not very fond of the fact that everyone seems to fall in love—and I do mean everyone—because it seems to detract from the central story of Ian and Augusta; however, I really loved reading The Bridegroom Wore Plaid.  You see, Burrowes creates multilayered characters who grow and change throughout the stories, and she creates emotional connections between characters that feels believable.

It’s not perfect, I know, but it’s lovely and sweet and, of course, it has all those lovely Scottish accents. 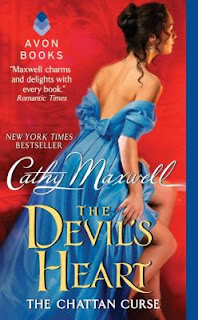 In The Devil’s Heart, book three in “The Chattan Curse” series by Cathy Maxwell, Lady Margaret Chattan is desperate to break the curse that’s slowly claiming the lives of her brothers.  She’s traveled to the Highlands, back to the ancestral home of the Chattans in the Scottish Highlands, in the hopes of saving her family.  She doesn’t expect to meet Heath Macnachtan—or lose her heart in the process.

I read The Lyon’s Bride, which I thought was a decent novel—I mean, I enjoyed it enough that I decided to go ahead and read the next in the series—but then I finished The Scottish Witch and I quickly found myself losing interest in the series.  I like Cathy Maxwell’s novels, but much of her work is hit-or-miss for me.  The Devil’s Heart, unfortunately, is one of those misses.  Like the previous novel, it just didn’t strike the right chord with me.  I didn’t like the characters very much, I didn’t like the development of the story, and I didn’t like the blatantly supernatural qualities, which had been more subtle throughout the rest of the series.

Overall, I just didn’t like it.  I suppose it’s a passable series, but I don’t highly recommend it.
Posted by BPL Ref at 9:15 AM