Death of a Salesman by Arthur Miller


We are delighted to have a new reviewer with us!  James Baur is a student at Valparaiso University, in Indiana who lives in Bristol when not away at school. While he studies Japanese and Accounting, he has always had a strong interest in literature and drama, especially classic works.  We hope to have more reviews from him in the future.  Here is his first for the BPL Bookblog: 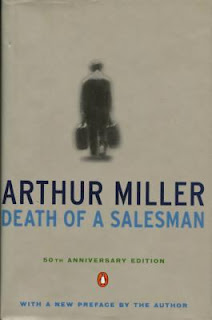 
Written in 1949, Death of a Salesman is a classic American play that has been met with overwhelmingly positive reception over the years. Winning both a Pulitzer Prize for Drama and a Tony Award for Best Play, the play focuses on the exploits of the Loman family, exploring timeless themes such as “the American Dream” and what it means to be a well-liked person. While much of the play takes place in a quaint home setting, make no mistake – from the moment the action begins to the bitter end, every page is filled with secrets, delusions, and outbursts of frustration as the patriarch of the family, William Loman, struggles to face the unfortunate truth of his failed business career.

As the story begins, we are introduced to William and Linda Loman, as well as their adult children Biff and Happy. William is a salesman, and Linda is a housewife. Biff and Happy are two flawed men seeking a change in their lives after finding little success thus far in the world of business. While William is initially presented as smooth-talking businessman who always gets the deal, it very quickly becomes clear that something isn’t quite right with his behavior. Seemingly obsessed with his public image and fond of talking to other characters when they aren’t present, William is far from the suave young man he thinks himself to be. To explain William’s problems, Death of a Salesman makes the smart choice of showing instead of telling as it seamlessly shifts from scenes taking place in the present to ones in the past. For example, in one scene William is discussing future career plans with Biff and Happy, only for William to begin praising them as they wash his car presumably decades prior. Moments like these are prevalent throughout the story and are excellent at showing just how delusional William has become. Entirely dissatisfied with the current state of his life, William spends much of the play mired in the past, convincing himself that things are the way they were in his prime.  Given that the story is intended to be presented on a stage, these moments can be difficult to understand in a textual format, but once recognized become interesting and somewhat disturbing as the plot continues. Careful attention to the stage directions will serve the reader well when reading through the story.

Death of a Salesman, as the name implies, uses a tragic ending to teach a universally applicable lesson about how to carry oneself through life. Is it worth it to chase “the perfect life”? Does it matter how other people perceive us? What exactly is “success”? These questions, as well as many more, will spring to mind as the fate of the family unfolds. Ultimately, the play wants us to accept a message that may be hard to swallow. Not everyone in the world can be the perfect, rich salesman of their profession – but that’s okay. As long as we stay true to ourselves and find what makes us happy instead of exhausting ourselves with what simply cannot be, our lives will turn out much better. Many people have at some point found themselves tirelessly striving to be the very best in a group, and this play shows us an interesting spin on what can happen if we go too far with it. This simple, yet dramatic source of conflict that is likely familiar to many readers certainly has something to do with how popular the play has continued to be since its creation.


Overall, I would recommend this play to just about any audience. If you’re a fan of reading Shakespeare or similar works and you haven’t read this yet, pick it up as soon as you get the chance. It’s short, grammatically simple, and presents a very powerful story. The format of reading a play may be initially confusing to those who aren’t used to reading them, but the worst-case scenario is you have to read a few lines a couple of times for clarity. Everyone should experience this American classic, both on text and on the stage.
Posted by BPL Ref at 10:30 AM