Once again, we are pleased to have Kevin Tipple as our guest reviewer.  An avid mystery reader, Kevin's blog keeps people up to date with information about mysteries, upcoming books, and more.  Check it out at Kevin's Corner. 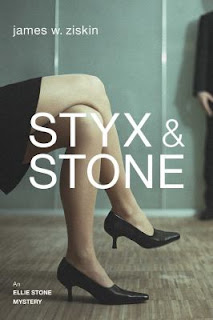 It is late January of 1960 as Styx & Stone: An Ellie Stone Mystery begins and Ellie Stone gets some bad news from the local sheriff.  Her father was found unconscious in his New York City apartment and is now in the hospital in critical condition. Eleonora “Ellie” Stone, a reporter and the only living child of Professor Abraham Stone, is going to have to take some time off from her job in New Holland and go back home to see about her dad. Their relationship is not a good one as they are estranged and now she is faced with dealing with their past issues as well as the current crisis.

Upon arrival she soon learns that it was not a stroke or a heart attack that put her father in the hospital. He was violently assaulted and his home office and library was ransacked. This occurred just days after her brother’s grave was severely vandalized. While the police believe the events are not related and the assault on her father, a renowned Dante scholar and esteemed professor, was nothing more than a random burglary, Ellie has her doubts. Especially since another professor, well known to her father and a colleague, died in somewhat mystery circumstances in close proximity time wise to the assault on her father.

That fact, what happened to her brother’s grave, the very specific damage in her father’s apartment, and more makes Ellie question the police investigation from the start. Ellie considers herself a “modern woman” and has no problem with asking questions and pushing for answers when she isn’t thinking about the past or enjoying the pleasures of the present. She drinks, she smokes, she likes a good time with a man who strikes her fancy, and Ellie won’t put up with nonsense from others.

Styx & Stone: An Ellie Stone Mystery is the start of a series and a good one. While all the characters are complicated in this tale to some degree (no cookie cutter cardboard cutouts need apply), Ellie Stone is exceedingly complicated. There is depth and nuance to this character that is rarely found in the first novel of a series. She also has a subtle sarcastic streak that appealed very much to this reader.

While historical mysteries are not my usual reading material, I thoroughly enjoyed Styx & Stone: An Ellie Stone Mystery. A complicated tale with characters of depth and nuance, the mystery itself was a difficult one to solve kept this reader engaged, and the read was flat out very entertaining on all levels. Styx & Stone: An Ellie Stone Mystery was a very good book and is strongly recommended.