Once again, we welcome back Kevin Tipple with a review.  Catch up with more reviews, book news, and interesting links at his blog, Kevin's Corner. 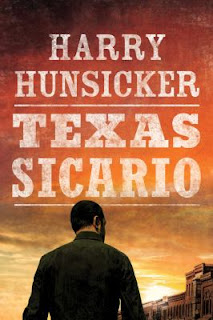 As Texas Sicario by Harry Hunsicker begins, former Texas Ranger Arlo Baines is back in Dallas and now working as head of security for Aztec Bazaar. The bazaar is located in a predominately Hispanic area of the city where the narcotic business is hard at work in seen and unseen ways. The murder of Alejandro Sandoval behind the bar located next to the Bazaar draws the interest of many including Arlo Baines.

Still grief stricken over the loss of his family and now a surrogate parent to a young street kid by the name of Miguel, he doesn’t really want to be involved in the case. He wants to drink, makes a few bucks, and be left alone and in peace as much as his mind and grief will allow. But, he knew Alejandro a little bit from the neighborhood and is bothered by what happened. Then there is the fact that the murder might mean a problem for another friend who is not only his boss but a fellow sufferer as that man’s family was killed back home in Nuevo Laredo. Then there is the fact that stranger who appears to be some sort of high level cartel enforcer has been making sure that Arlo Baines knows he is around.

If that was not enough, everyone knows that the Dallas Police Department has been woefully understaffed for years. A homicide in the area will be written off as some sort drug deal gone wrong regardless of the truth of that. The fact that Texas Ranger Aloysius Throckmorton is on the case is a sign that there is something fairly big going on. Not only is he a public racist and does not care who he offends, he is also the Ranger who pretty much did everything he could to see Arlo quit even after he was cleared of murdering his family.

Arlo’s being involved, even on the edges, has gotten Throckmorton interested.  Throckmorton is acting as some sort of go between for the Department of Public Safety and the DEA and he wants Arlo’s help. The murder could be the first indication of a power play with the drug cartels for North Texas. That and the fact that Miguel could be involved in some way drags Arlo Baines into an often violent mess.

Texas Sicario by Harry Hunsicker is another fast paced and often violent read that rips along through the underbelly of Dallas again exposing the rot beneath the city’s façade. Author Harry Hunsicker has a long history of exposing the less glamorous aspects of Dallas in his fiction starting with his very good Lee Henry Oswald Mysteries. While the chamber of commerce types may not appreciate his insights, we locals who have been around for decades certainly do.

While it is not necessary to read the previous book in the series, The Devil’s Country, before reading this one, you really should. You should read Texas Sicario as well. Both books are really good.