The Mountain Between Us by Charles Martin 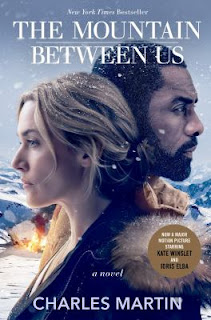 Ben Payne is a surgeon with a busy schedule and Ashley Knox is a magazine writer, who is desperate to make it to her own wedding.  Together, they charter a small plane in the hopes of making it home before a blizzard strands them in Salt Lake City.  But when their pilot crashes, Ben and Ashley find themselves stranded in the High Uintas Mountains without food, without shelter, badly injured and hopelessly lost.  They will have to rely implicitly upon each other if they hope to survive.

The Mountain Between Us by Charles Martin is an absolutely wonderful book.  Primarily told from the perspective of Ben Payne, captured through snippets of his personal narrative and recordings he makes, The Mountain Between Us is one of those novels that’s hard to put down.  Although the suspense of the story—I literally spent hours wondering, would Ashley make it?  Was Ben going to survive?—kept me glued to the pages, I think the pacing had a lot to do with why I couldn’t seem to pry myself away for more than a few minutes at a time.

A recording separates nearly each chapter, giving readers a glimpse into the harsh realities of what Ben and Ashley face and, moreover, offering readers the opportunity to learn more about Ben’s life.  These little dividing chapters are not very long, but they have a lot of impact and they feel very intimate, very personal.  They also help to flesh out Ben’s character and give him a depth—a very human aspect—that I appreciated.

Although The Mountain Between Us is listed under Christian fiction, I noticed Martin uses religion with a very subtle touch.  Likewise, the romance isn’t forced—it builds very slowly and, more importantly, it doesn’t overshadow the fact that both Ashley and Ben are fighting for their survival.  The progression of their relationship feels natural, which I really liked, because, let’s be honest, if I were stranded and starving on a bleak mountainside with serious injuries, I really wouldn’t be thinking much about romantic intentions—even if he is Idris Elba.

Overall, I really enjoyed reading The Mountain Between Us for BPL Book Club and I look forward to checking out more from Charles Martin.
Posted by BPL Ref at 9:44 AM