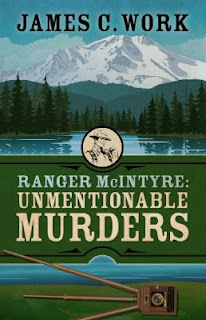 Ranger Tim McIntyre, WWI vet and fishing enthusiast, is enjoying his job as ranger in the newly minted Rocky Mountain National Park.  Not that there’s much to do, except stop city folk from feeding marshmallows to chipmunks, man the entrance gate (except that there’s no gate), stop poachers, and the like.  He’s certainly enjoying a visit with Doris, the lady photographer who is visiting to take photos of some of the park’s waterfalls in hopes of selling them for picture postcards, magazine articles, or maybe even a book.  He’s not quite prepared to embark on a suspicious death investigation, but when a body of a man is found clad only in his underpants, he really doesn’t have much choice but to trek on up to the remote location, Doris in tow, to see what he can discover.

This is a promising beginning to a new series, set in the early 1920s.  Ranger McIntyre is a delight, a man who has been to war and is aware of the dark side of human nature, but hasn’t let it turn him bitter.  He takes a lively interest in his fellow human beings, and an even livelier interest in fish, but puzzles are what he likes best.  The mystery of this dead guy in his skivvies is a doozy and our ranger is dead set on figuring it out.

I was enticed to read this book by the reviews that mentioned the likeable character, amiable humor, and –oh, all right, the Publishers Weekly review said Ranger McIntyre was a smarter version of Dudley Do-Right and I was hooked.  They were right! Tim isn’t dim at all, but his laid-back personality causes people to underestimate him.  He has an eye for the pretty ladies, and an even sharper eye for good grub, but there’s a lot more going on in that brain of his.  I liked the sweet nature of the book; Ranger McIntyre isn’t naïve but he doesn’t go looking for the bad in everyone either.

I also enjoyed the setting:  not just the park, but the Prohibition period, when people are first taking to the road to search for the great outdoors.  Since the park is so new—and the whole park system is fairly new—everybody is trying to figure things out.  Questions such as, “Who has jurisdiction over a crime in the park?” need answers, but in the meantime, the rangers do the best they can.  Photography, while not new, is still a bit of a novelty as everyone rushes to get photos of places few people have seen.

A “don’t miss” part of the book for me was the glossary which gives definitions that you didn’t know you needed.   Under “Chipmunk,” for example, Work notes that scientists have spent a great deal of time and effort to find out that they are not gophers, marmots, or prairie dogs, but that tourists have been known to blur such distinctions and send children out “to give  peanuts to  the ‘chipmunks’ which turn out to be brown bears.”

Yep, next time Ranger McIntyre is on the case, I’ll be happy to ride along.
Posted by BPL Ref at 9:20 AM