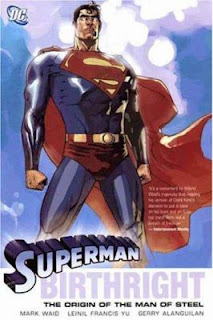 Superman fights for truth and justice—but why?  What drives a farmboy from Kansas to become one of the mightiest superheroes in the world?  In Superman:  Birthright, Mark Waid and company attempt to answer that question by telling the origin story of the Man of Steel in an all new way, drawing together pieces of his fabled history and brand-new stories that shine a different light on Clark Kent, Lex Luthor, Lana Lang, and others.

When I see a comic book with Mark Waid listed as one of the writers, I automatically pick it up and check it out.  I instinctively know his work will be great—I mean, he wrote my favorite arc of Daredevil, Kingdom Come, the new Archie comics, Irredeemable and Incorruptible.  He has yet to disappoint me—and, truthfully, Superman:  Birthright lived up to my expectations.

Although I found it a bit surreal to dive into Superman’s past, as I’ve mostly read comics about his career as the world’s greatest superhero, I was pleasantly surprised by how much I enjoyed the story.  In Birthright, Waid introduces the idea that Lex Luthor and Clark go way back—and I mean way back—and further tangles their lives, creating an incredibly complex relationship that goes beyond the good versus evil, hero versus villain dynamic.

Moreover, Waid touches upon the idea that Superman is not, in fact, perfect or infallible.  In so many comics, Superman is like the golden boy of superheroes—he can do no wrong, he always does the right thing, and he never messes up or loses.  In Birthright, Superman doesn’t just come onto the scene and gain immediate acceptance.  People don’t trust him; they have reservations and they ask questions, like “Who is this guy?  Why is he here?  What does he want?”  There’s a lot of distrust toward him, especially after Lex gets his hands on pieces of Kryptonian technology.

I loved that Waid and company added so many layers to Clark’s character.  Superman has been labeled a Boy Scout for much of his career, so I loved seeing different sides of his personality.  I liked seeing him as a person, not a caricature.  He can be hurt—not physically, of course, but emotionally.  He has been shaped by his experiences (not all of them good) and yet he still chooses to do good, he chooses to be good.

I really liked that about him.

I was also intrigued by how Waid fleshed out his powers.  Oh, he has all the same ones that everyone knows:  he can run faster than a speeding bullet, he can leap tall buildings in a single bound, he can fly, and he can’t be harmed by any conventional weapon.  He’s exactly the same superhero everyone knows and loves, but he has the added benefit of being able to see life.  I don’t mean recognize it and/or treasure it; I mean, he can literally detect the life force within a person—and he can see it leak away when they die.

Superman’s vow to protect people takes on a whole new meaning when you realize he’s a witness to life and death in this way.  He can see the exact moment someone or something dies.  He sees a void where something bright and beautiful had once been, and he can’t bear the thought of seeing it happen when he knows he can do something about it.  It gives his promises a lot more meaning, in my opinion, and it makes more sense as to why he pushes himself to protect people even when they don’t believe in him—even when the easier course would be just to give up.

Overall, I loved Superman:  Birthright.  I can honestly say it is my favorite Superman comic of all time.  Don’t get me wrong, I still love Red Son by Mark Millar, which has held top spot in my heart when it comes to Superman comics, and I really enjoyed American Alien by Max Landis; however, Birthright feels special and it resonates in a different way.  It humanizes Superman, makes him a superhero that readers can really understand and enjoy.