Reported by Lauren
This week’s Nevermore group was small but mighty. And really into books about life-or-death situations. 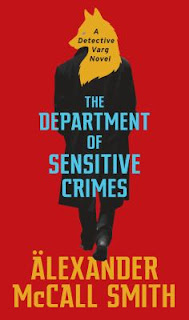 The first book we discussed was The Department of Sensitive Crimes by Alexander McCall Smith. Our reviewer found it charming and hilarious, and even loved the author’s headshot on the back cover, saying it was obvious “this guy truly enjoys life, you can tell by his picture and the way he writes.” About a team of dedicated detectives who investigate random crimes that don’t really fall into any other broader categories, this novel tells the story of Detective Varg and his coworkers, Carl who loves paperwork, Erik who loves fly fishing, and Anna who loves Varg. What is a sensitive crime you ask? Some examples include a young woman who reports her imaginary boyfriend missing, and a gentleman who is stabbed in the back of the knee by a stranger in a crowd. Each chapter is connected, all contain equal parts humor, emotion, and action, and the book has a great conclusion that manages to tie up all the loose ends. Our reviewer highly recommends this first novel in McCall-Smith’s latest mystery series. 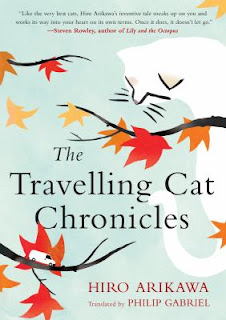 Our next member shared The Travelling Cat Chronicles by Hiro Arikawa. She called it one of the sweetest books she’d ever read, saying she cried happy and sad tears throughout the entire novel. This book tells the story of Satoru and the stray cat he adopts named Nana. The two travel the world together visiting old friends. The story is told from the point of view of Nana, and describes the life-long bond between him and his owner, with little nuggets of cat humor and human wisdom tucked inside their travelogue. Another member recommended If Cats Disappeared from the World by Genki Kawamura for a similar story with lots of heart. 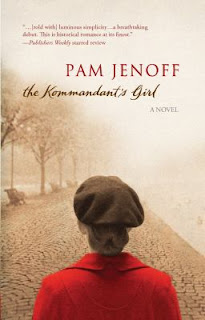 Next we discussed The Kommandant’s Girl by Pam Jenoff. Our reviewer picked this up because she loved Jenoff’s other works, The Orphan’s Tale and The Lost Girls of Paris, all of which deal with WWII and the horrors of the Holocaust. This book is about a young Jewish girl named Emma who doesn’t look Jewish, so she is smuggled out of Poland safely to live with a Catholic aunt (who is actually part of the Resistance, though she pretends to be a Third Reich supporter). The aunt invites some esteemed Nazis to dinner to show support for the cause, and a Kommandant takes a special interest in Emma, hiring her to be his personal assistant. Emma can’t say no, and her aunt and others in the Resistance movement attempt to use her as a spy to relay inside information back to them from her new post behind enemy lines. Our reader said the book was romantic, emotional and suspenseful, and offers a different view of the era. 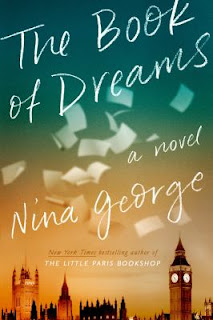 Coming back to the present, our next reader shared Nina George’s brand new novel The Book of Dreams. Protagonist Henri is on the way to meet his long lost teenage son Sam when he is struck by a car and rushed to the hospital. He is in a coma for weeks; Sam visits him in the hospital every day. While there, Sam meets a woman named Eddie who has been in love with his father Henri for many years.  The two form an unlikely friendship, bonding over their shared tragedy. Our reader described the book as moving and absolutely worth reading. It offers insight into what coma patients are “seeing” and feeling while unconscious, and the relationships that form during Henri’s ordeal are interesting and inspiring. While in his coma, Henri relives some of the most important moments of his life, experiencing the heartaches and the triumphs over and over again, and pondering all his missed opportunities. It made our reviewer think about what was truly important in life, what living really means, and the legacy we all wish to leave behind when we die. 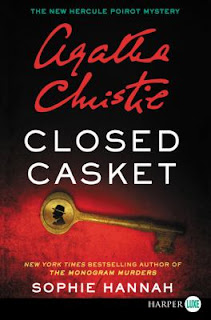 Our last Nevermore reader is a die-hard Agatha Christie fan, so she reviewed Closed Casket: A New Hercule Poirot Mystery by Sophie Hannah. Hannah was granted permission to continue writing about Dame Agatha Christie’s most famous detective, but our reader feels that she has not been doing Poirot justice. Poirot has become a caricature of his former self. While still brilliant, he is now bumbling, too eccentric, and distant. Hannah’s narrator, Edward Catchpool, is a ridiculous excuse for a Scotland Yard detective, who doesn’t even really like Poirot.  The mystery itself is intriguing: wealthy author Lady Athelinda Playford invites her family, her lawyers, Catchpool, and Poirot to dinner to announce that she is disinheriting her children in favor of her personal assistant, who is terminally ill. Why would Lady Playford leave all she has to a man who will likely die before she does? The plot contains several twists, and of course Poirot provides a detailed and highly entertaining resolution by the end of the book. However the novel still falls short of Christie’s standards. Our reviewer hopes Hannah will redeem herself in the next installment. 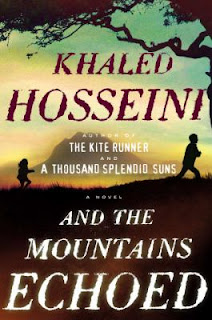 Other novels discussed included And the Mountains Echoed by Khaled Hosseini (plus all his other books), which our reader described as enlightening and life-affirming; and Sum: 40 Tales from the Afterlives by David Eagleman, which is a book of short stories about what happens when we die. Our reader said it was interesting, but depressing and hard to read. For more light-hearted discussions about serious topics, join Nevermore every Tuesday at 11:00am!
Posted by BPL Ref at 10:14 AM