The Lost Night by Andrea Bartz 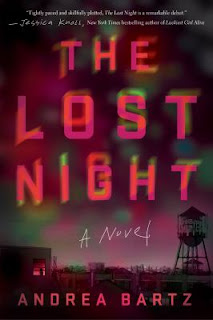 Lindsay is a 33 year old magazine fact checker in New York City. She has a couple of close friends but her dating life is essentially non-existent (besides an occasional hook up with a commitment-phobe). She’s lost all contact with her friend group from her early 20s and since her current best friend is married with a baby on the way, Lindsay feels herself slipping further and further into isolation.
Lindsay finds herself contacting one of her old friends Sarah from the early days in order to catch up and reconnect. They end up discussing Edie, Lindsay’s best friend when she was 23 who died by suicide 10 years ago. Sarah always felt suspicious about Edie’s death, the discussion of which sends Lindsay down an investigative rabbit hole that will threaten her own life. Unfortunately, there are big gaps in Lindsay’s memories thanks to her early 20s drinking binges. So she uses her fact checking expertise to dig deeper.
The first half of Bartz’s novel is very, very slow. I understand that set up is important but it seemed to just drag a little too much, and I started to get restless. Fortunately, it does start to pick up and the last half is pretty enjoyable. Lindsay can sometimes be a mopey mess but I also sympathized with her. She feels like the pitied single friend and her old insecurities bubble up to the surface even though she thinks she’s too old for that. (Like a “thumb on a bruise” as Bartz describes it.) The mystery itself isn’t revolutionary but it’s entertaining and a little pulpy, and that’s just fine with me. It was also fun to read about someone exactly my own age.
I enjoyed this novel for the most part. If you think you can handle the sluggish build up, the second half makes up for it and makes this ideal for a lazy, beach read.
Posted by BPL Ref at 10:28 AM