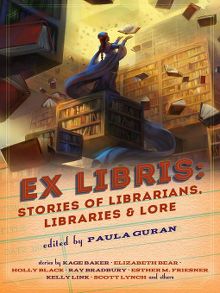 A delightful e-book available through Tennessee READS, Ex Libris: Stories of Librarians, Libraries & Lore is a collection of stories written expressly for book and library lovers.  As a long time library junkie (currently wearing a shirt that says “BOOK NERD”) I was enthralled by the very thought.  A book of stories about books and reader and librarians—wow, what could be better?

In the House of the Seven Librarians by Ellen Klages immediately captured me, as a traditional Carnegie library building was retired in favor of a more modern structure across town.  Although a few volumes were transported to the new library, most were stamped Discard and left on the shelves of the aging building with the vague thought that a book sale would be held.  The aging librarians also remained.  Years passed and the seven librarians maintained the library collection, until one day a surprise package arrived to change everything.  That’s only a few pages into the story, so I’ll leave that there to invite you into the tall doors of that old Carnegie library.

Even Ray Bradbury has an entry here, Exchange.  When a young military officer returns to his childhood library, Miss Adams the librarian does indeed remember him, and the books that he devoured.  The library was a protective place for William Henry Spaulding, and he is compelled to make a quick stopover on his way to his next posting.

Paper Cuts Scissors by Holly Black takes us into a world where the characters in books can come to life, and where living, breathing, human beings can also go into this world and interact with those well-known characters.  What sort of temptation would it be to remove yourself from the “real” world in favor of living with Anne of Green Gables, Hamlet, or Anna Karenina?

Many other alternate worlds are included in this collection.  Worlds in which paper books have been long lost and then found, worlds with wizards spinning magic, worlds in which people have very strong opinions about whether the Dewey Decimal System or the Library of Congress is the proper way to catalog—all of these worlds are found here.

From ancient repositories to digital collections, all libraries are celebrated and appreciated by someone, even if only a few.  These twenty-four authors have contributed a wide variety of brilliant stories.  Pick it up—something is sure to engage you.
Posted by BPL Ref at 11:07 AM