The Two Towers by JRR Tolkien 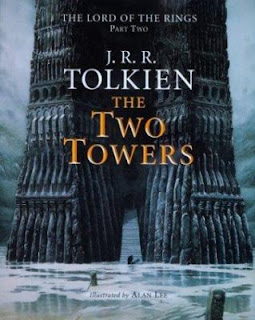 With the dissolution of the Fellowship, Frodo and Sam have struck out on their own for the gates of Mordor, while Gimli, Legolas, and Aragorn go on a frantic search for Merry and Pippin as they are taken farther and farther away in the clutches of Saruman’s orcs.  Great battles and great hardships will ensure as the remaining members of the Fellowship are pushed to their limits in their desperate fight to hold off both the foes of Orthanc and Barad-Dur.  And Sam Gamgee, loyal and courageous companion to Frodo, will face the most difficult decision of his life as they draw closer to the dark, arid lands of the Dark Lord.

Like The Fellowship of the Ring, Tolkien crafts an intricate story with beautiful scenery and amazing characters, who will steal your heart and last forever in your memory.  (I’m talking about Treebeard and Eowyn here.  Although I love Sam to death and I still have a lingering crush on Aragorn, I adore Treebeard and, as always, I love a good, strong female character—and Eowyn does not disappoint.)

In The Two Towers, Tolkien further develops his characters and expands upon their relationships, creating intricate webs of connections that stretch across the entirety of Middle-earth.  Gimli and Legolas, despite the ancient animosity exist between their races, have become close friends; Aragorn has ventured closer to embracing his destiny; while Merry and Pippin have begun growing into warriors in their own right, finding ways to survive even when the odds are stacked against them.

It’s interesting to see how these characters I’ve loved have changed and, more importantly, to see how their paths change with the introduction of new characters, like Eowyn or Treebeard or Faramir or, most importantly, Gollum.  (Gollum, also known as Smeagol, is one of those interesting characters that sticks out in a reader’s mind.  I’ve often wondered where Tolkien received inspiration for him; I mean, he’s such an odd character that I’ve never noticed his like anywhere else in literature.  He’s also unexpectedly important to the climax of the trilogy—just keep that in mind!)

The pace of The Two Towers is another aspect that has changed.  Readers can feel the greater urgency as they read the story—conflict in Rohan is brewing on the horizon, Saruman is stretching his arm wide in a grab for power, and Frodo and Sam are drawing ever closer to Mordor and the destruction of the Ring…or themselves.  The tension of the story is palpable and, worse, it leaves you with an awful cliffhanger.  I immediately had to continue with the third novel, Return of the King, because I simply couldn’t rest easy with the fates of Frodo and Sam and, well, everyone else hanging in the balance.

Yes, I have read the books.  (Three times, to be precise.)  But that’s exactly what makes Tolkien’s books so wonderful to read:  even when you know what will happen in the next few chapters, you still want to keep up with the story—it’s just too good to put aside.

I will note that the formatting in this novel does drive me a bit batty.  Once the Fellowship is shattered, the story splits into two parts:  the journey of Sam and Frodo as they continue their journey to Mordor, and then everyone else.  Tolkien doesn’t take pity on his readers and alternate his chapters; instead, he starkly divides them.  Throughout the first half of the novel, I was constantly wondering what happened to Frodo and Sam—did they make it through Emin Muil?  Were they really going to cross the Dead Marshes?—but, once I left the sundered remains of the Fellowship behind, I couldn’t help wondering what was happening—was Pippin going to be okay?  What exactly is a palantír, and why is it so dangerous?  And was Aragorn ever going to make it to Gondor?

To say the least, I was frustrated.  Luckily, The Return of the King is a little more forgiving and keeps you apprised of all the adventures at once, bringing the threads of the narrative together in an amazing climax.  But that’s for the next review.