A Grown Up Kind of Pretty by Joshilyn Jackson 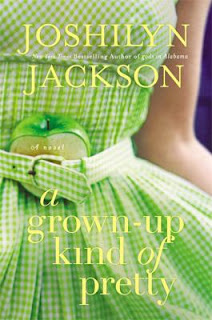 But it’s not as if Mosey is all she has to worry about:  Liza suffered a stroke before she was 30 and is struggling to learn to talk and move again.  Big thinks that water therapy was helping Liza, so she is determined to build a pool in their yard, despite having to take down Liza’s beloved willow tree.

When the tree comes down, a box is uncovered.  Big recognizes it immediately:  it belonged to Liza.

Inside are the bones of a baby.

The revelation shakes the family to their core, as Big and Mosey alternately try to unravel the mystery and keep it hidden, while Liza remains trapped in inside her head, struggling to communicate the truth.

A co-worker is a Joshilyn Jackson fan and always recommends her books, but I had not picked one up until Book Bingo.  The square was “Read a book by a Southern author,” so I decided this was my  chance.  I wasn’t quite sure what to expect, but I found myself captivated by A Grown Up Kind of Pretty.  The family is not quite respectable in the eyes of the eyes of the town; Liza, especially, is considered a “wild child,” not only for getting pregnant at 14 but for taking the baby and running off who knows where for several years.  Women in town regard her suspiciously, sure she is about to make off with their husbands—or at the very least have a fling.  Mosey is considered suspect because of her mother, and Big—well, Big is a force of nature, trying to protect her family.  The book alternates points of view between the three women, giving each a distinct and memorable voice.

Jackson’s stories have been described as having an “earthy” quality, and I would certainly agree to that; while there’s no explicit sex scenes, things are discussed frankly.  What impressed me the most, though, is the bonds of love between the three generations.  The book is also very, very funny, and there are enough twists and turns in the plot to keep a reader glued to the book.  Characterization is one of Jackson’s strong suits: she creates people we care for and want to know more about even after the book comes to an end.
In a way, Jackson’s writing reminds me of another author I love, Sarah Addison Allen. Although Allen’s books are sweeter and lack Jackson’s grit, the emotions evoked are similar.

I thoroughly enjoyed my visit with the Slocumbs, and I’ll probably pick up another Joshilyn Jackson book in the future.
Posted by BPL Ref at 10:17 AM