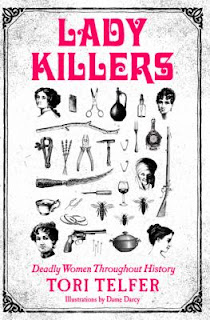 According to Lady Killers, a FBI profiler infamously declared, “There are no female serial killers.”  Tori Telfer, in her book, sets out to prove him wrong with fourteen examples of creepy, cruel, cunning, and horrific killers—all female, all as violent and as destructive as their male counterparts.  In Lady Killers, Telfer explores the likes of Erzebet (aka Elizabeth) Bathory, Nannie Doss, Mary Ann Cotton, and Darya Nikolayevna, diving deep into the complex realities of female aggression—and predation.

I picked up Lady Killers:  Deadly Women Throughout History when I was putting it on the shelf.  I suppose I had a morbid curiosity about serial killers, plus I found the bright pink lettering and creepy imprints on the cover oddly appealing.  I picked it up, checked it out, and proceeded to enjoy it far more than I probably should have.

I had a handful of chapters that I really enjoyed:  “The Sorceress of Kilkenny,” which featured Alice Kyteler, who was accused of being a witch and killing four husbands; “Vipers,” featuring Raya and Sakina, prostitutes who owned a brothel and murdered several young women (and possible others) in Egypt after World War I; “Wretched Woman,” which focused on Mary Ann Cotton, who killed several of her own children, several of her husbands’ children, several husbands (in fact, she killed all but one) and lovers and, quite probably, many more; and, finally, “The Tormentor,” a chapter about Darya Nikolaevna Saltykova, a Russian noblewoman and genocidal maniac.

These were just a few of the more fascinating chapters in my opinion; however, every chapter was thought-provoking and captivating in its own right.  Tori Telfer does a fantastic job as an author, creating a thoroughly researched and interesting book on an increasingly morbid topic.  She writes with a sense of humor, but also a deep appreciation of forgotten and/or misinterpreted history.

In particular, I appreciated Telfer’s dedication to telling the truth or, at the very least, getting all her facts straight.  Telfer cuts through the terrible rumors and unfounded accusations that surround many of these women, dismissing what she cannot prove, and creates a believable portrait of each individual.

Elizabeth Bathory, for instance, is surrounded by a dark mythos of blood, terror, and sex.  She has become, on numerous occasions, a scandalous icon for debauchery and murder, a female counterpart to the wildly popular story of Dracula.  So much of what I knew of her was unreal; however, Telfer makes an effort to humanize her, to reveal her as a real person.  Yes, she committed heinous crimes and, yes, she was no doubt a murderess, but Telfer tells the story of a woman—albeit, a deeply disturbed woman—rather than a vampire or a dark temptress as she’s sometimes portrayed.

Overall, I think Lady Killers is an interesting book, but I realize it’s not for everyone.  It’s a book about serial killers, which means it’s invariably going to border on being gruesome, macabre, and downright bloody.  The ladies in Telfer’s book are unequivocally terrifying, just as much as any male serial killer.  Many of them, like the murderous women of Nagyrev and Nannie Doss, got away with killing for years; others, such as Alice Kyteler and Kate Bender, escaped justice altogether.  They’re all killers, plain and simple, and they’re frightening in their own right.

Perhaps one of the most frightening, in my opinion, was Darya Nikolaevna Saltykova.  Darya was a Russian noblewoman who lived during the reign of Catherine the Great and she killed, at the very least, 138 people (mostly women) during her lifetime.  She was inventive in her murders and, at times, she would kill someone with her bare hands if she didn’t think anyone else would or could do it.  And, as the author points out, she showed zero remorse:

“So Darya killed and killed again, confident in her impregnability and furious at her serfs for each petty mistake, for getting in her way, for being her responsibility, for existing.  If she was a god, then her serfs were her pitiful playthings.  She could make them clean; she could make them cook; she could make them scream and bleed and beg.  […]  ‘I am my own mistress,’ she cried.  ‘I am not afraid of anyone.’  This belief that she was superior, unassailable, and even consecrated by the law was integral to her sense of self.  Perhaps she killed to prove one simple point:  that she could.”

To me, Darya is petrifying, right up there with Charles Manson or Jeffrey Dahmer.
Posted by BPL Ref at 9:05 AM