The Return of the King by JRR Tolkien 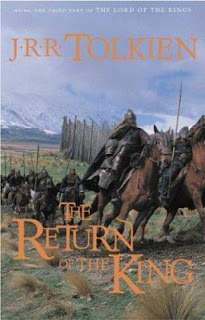 The Return of the King is the gripping conclusion to an epic undertaking.  All questions shall be answered and all fates will be decided:  Will Frodo and Sam finally reach the fires of Mount Doom—or will the land of Mordor, or other enemies stop them?  Will the Fellowship survive the relentless malevolence of Sauron?  Will Minas Tirith and the rest of free Middle-earth fall to the Dark Lord—or will the King finally return to his rightful throne?  Finally, all the different threads—Frodo and Sam, Aragorn, Pippin and Merry—will be brought together to finish the story and bring about the end of the Third Age.

JRR Tolkien’s final novel, The Return of the King, has become my favorite from the trilogy.  Although it feels like the shortest novel of the series—I think the pace simply makes it feel so—I think it also has the most adventure packed into it.  Not only will readers have the chance to learn the fate of all their favorite characters, great battles will be fought and blood will be spilled and lives will be lost and history will be changed forever.

It’s quite as dramatic as it sounds.

As always, Tolkien’s writing is magnificent.  He imbues something special into his writing, creating an incredible world of great beauty and deep darkness and fantastical sights.  He is able to convey so much in his writing and, more to the point, craft something that’s completely and totally unique—something that will influence fantasy writers for decades

I loved reading about Gondor, carved from the rocky slopes of the mountain; I loved imaging the wide, grassy plains of Rohan and the sunny beauty of Ithilien; I even enjoyed the imagery of Mordor with its dark, jagged mountains and dusty, gray plains.  I feel like I could taste the dry, gritty wind, smell the smoke belching from Orodruin.  Tolkien is a master of crafting a realistic landscape.

I also enjoyed reuniting with characters I have come to adore.  In particular, I was thrilled with the story of Eowyn.

As I noted in my review of The Two Towers, I love strong female characters—and Eowyn is a perfect example.  She’s a shieldmaiden, born and bred for battle, and yet she’s left behind by Théoden, her king, and Eomer, her brother, and even Aragorn.  Her narrative was one of my favorites in the entire novel, because both she and Merry defy expectations and flout convention by taking their fates into their own hands, twisting prophecy in the most unexpected ways.  After reading The Return of the King, she has quickly become my favorite female character in the entire series if not my favorite character, period.

I also enjoyed the way Tolkien delicately balances his story between the threat of two vastly dissimilar endings.  The Return of the King could just as easily turn into a tragedy as conclude happily.  The suspense he sets—the breathless moments of anticipation, the expectation that the entire quest could go awry—thrilled me and, inevitably, left me cheering as the story comes to a close.

Speaking of the conclusion, the end of the novel wasn’t quite the ending I expected.  After three books (four, including The Hobbit) and, no doubt, well over a thousand pages, an ending is a well-deserved reward, but Tolkien is a crafty fellow and the story doesn’t simply end once the quest is finished.  Tolkien throws in an additional few chapters, before giving readers the conclusion they so richly deserved.  Don’t get me wrong, I enjoyed these last few moments; however, it was unexpected the first time.
Posted by BPL Ref at 9:38 AM