Thread the Halls by Lea Wait 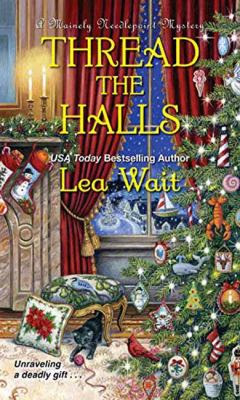 It’s the first Christmas in years that Angie Curtis has spent in Maine, having returned from Arizona. She’s missed snow, decorating, baking cookies, and spending time with those she loves—including Patrick West, the man she’s been seeing recently—and she is looking forward to doing all those things she loved as a child.   Unfortunately, her plans for a quiet Christmas get upended when Patrick’s movie star mother Skye calls to say she’s coming to stay Aurora, her estate, and is bringing  guests from the set of her current film.  She wants “a real Maine Christmas,” complete with decorations, traditional food, a sleigh ride, needlepointed gifts for her guests, the works.  With little time to prepare, Angie and most of her friends are drafted into helping with preparations.  Angie isn’t sure what Hollywood types will make of tiny Haven Harbor, but at least one visitor doesn’t have much time to form an opinion: one of the celebrities ends up dead within hours of arriving.

This is the sixth in the Mainely Needlepoint Mystery series, and I’ve enjoyed every one of them.  Angie is an interesting character.  Raised by her grandmother after her mother’s disappearance, Angie has had to make her own way in the world.  Most recently she had worked as an assistant to a private detective, which means she knows a bit about detecting and has her own Glock, but she’s not one of those interfering characters who decides she can solve the crime better than the police.  Her involvement is often involuntary, but she doesn’t back down when there’s a problem.  There’s an interesting assortment of supporting characters, including Gran, now a newlywed, who is a strong and steadying presence.  Sarah, an Australian who runs an antique and gift shop, always has a pertinent quotation from Emily Dickinson, while high school teacher Dave has his own poison garden.  Patrick seems to be a kind and thoughtful young man. None of them are stereotypes, and relationships aren’t taken for granted.

All this is set against the Maine landscape, which Wait clearly loves.  There are vivid descriptions of the area, along with detours into history and economics; in other hands this could be boring, but I find it fascinating. In this particular entry, I could almost smell the pine boughs and hear the crunch of boots in the snow. The seasonal setting make it a good choice for anyone wanting to get into a holiday frame of mind.  I just wish I could have tasted some of Bev’s pork pie (recipe is included.)  I’ve read other books set in Maine, but this is the first one that actually made me want to go visit someday.

Followers of Kevin Tipple’s blogspot will know that I consider this series to be a good one for the treadmill.  Since I am not fond of exercise in general and the treadmill in particular, I have to have a book that will hold my attention and keep me entertained until I reach the magic number of steps.  In fact, I have occasionally exceeded that number to read “just one more chapter.”

Solutions to the crimes tend to come right at the end, and to come swiftly.  That’s not a criticism, just an observation.

Those who favor fast paced thrillers or intricately clued mysteries may not find this to be their cup of tea, but readers who appreciate setting and strong characterization should enjoy this series.  I certainly do.

The series doesn’t need to be read in order,  but I generally prefer to do it that way just because I like to see how characters develop. These are the previous books in the series:

1. Twisted Threads
2. Threads of Evidence
3. Thread and Gone
4. Dangling by a Thread
5. Tightening the Threads

Full Disclosure:  I won an Advanced Reader’s Copy of this book in a contest sponsored by the author.  I was under no obligation to provide a review, favorable or otherwise.