The Proffitts of Ridgewood: An Appalachian Family’s Life in Barbecue by Fred Sauceman 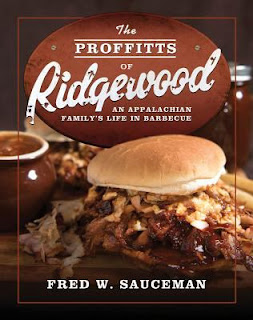 In 1948, Grace and Jim Proffitt, a young couple with two small children and deep roots in East Tennessee decided to see if they could earn some extra money by opening a restaurant.  They’d a bit of experience in running a country store, so with two partners they opened an eatery in Bullock’s Hollow.  Named for a hotel in Dayton Beach, the Ridgewood Grill featured steak, country fried chicken, and—somewhat oddly—oysters. The venture was doing fairly well, and then they were dealt a setback:  Sullivan County went dry.  Since beer sales had been a strong source of revenue, they had to re-think their business plan.

Instead of a grill, they decided to specialize in barbecue. The rest, as they say, is history.

Like the Colonel, Ridgewood has its secret recipes.  The barbecue sauce, perfected over time by Jim Proffitt, doesn’t have a written recipe. Instead, at the proper time, a family member is chosen to memorize the ingredients; most recently, Larry Proffitt passed the barbacue recipe to his daughter, Lisa. Also cloaked in secrecy is the recipe for the blue cheese dressing, which is so good that it’s eaten from a bowl with crackers instead of being spread over salad. People purchase it by the quart to take home.  Other famous dishes are the baked beans and coleslaw.

Fred Sauceman, a food historian with a strong interest in the Appalachian region, is the perfect writer to record the history of the legendary Ridgewood.  He knows the region and the people in general, and The Ridgewood in particular. He does an excellent job of describing how the restaurant has fared through the years, being passed from Grace and Jim to their sons, and now the third generation is behind the counter.  While family members have outside jobs –ever practical, they are encouraged to choose professions suitable for making a living--but the restaurant remains a labor of love.

Sauceman discusses how the classic menu came to be, including the design of the pit for smoking the ham (never pork shoulder, which is for sausage) and the creation of the tomato based sauce. Some side dishes warrant their own discussion, coleslaw for one. The emphasis is all on fresh, quality ingredients, without shortcuts.

This attention to detail and quality has won the restaurant nationwide recognition, including a photo in People magazine with a testimonial from the Sterns (“Road Food”) and a visit to “Good Morning America.” NASCAR drivers, professional football players, TV personalities, and other celebrities have made their way to Ridgewood, but it’s the local customers who have supported the restaurant over the decades with a fierce loyalty.

The book is as much about the family and the region as it is about the food.  To Sauceman, the Proffitt family epitomizes Appalachian regional values.  Besides quality, frugality, generosity, and pride in one’s work, the emphasis is on family and relationships.  Most of the employees have worked there for decades, sometimes with three generations of one family working together.

When I confessed that I had never been to Ridgewood, my admission drew gasps from the audience.  I have been told that I simply must  make the trip.  After reading The Proffitts of Ridgewood, I am inclined to agree.  But whether you are a regular customer or neophyte like me, I think anyone with an interest in our region would enjoy this book.
Posted by BPL Ref at 8:14 AM