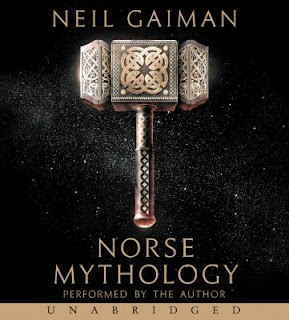 
The Norse pantheon is wide and great and varied.  In it, readers (and listeners!) get to meet Odin, the One-Eye; Thor, Odin’s son, and god of thunder; Loki, a trickster, who is the god of mischief and manipulation.  They have been around for centuries and they have influenced readers and authors alike.

In his latest book, Norse Mythology, Gaiman, as the book cover suggests, “[re-fashions] these primeval stories into a novelist arc that begins with the genesis of the legendary nine worlds and delves into the exploits of deities, dwarfs, and giants.”  He brings the Norse gods to life, once more, recreating their stories—their lives, their passions, their foibles—and making them as vibrant and colorful as they once were.

I listened to Norse Mythology as an audiobook and, personally, I think that’s the best way to enjoy Neil Gaiman’s latest book.  I absolutely adored Norse Mythology, and I loved listening to Gaiman narrate it.  It has quickly become one of my favorite audiobooks, simply because Gaiman is a master storyteller whether he’s using the written word or reciting it aloud.

There’s something magical about Norse Mythology.  I mean, you can really tell that Norse mythology really means something to Gaiman.  He’s poured his heart and soul into telling these stories and telling them well, and he’s created something that’s both familiar and wholly unique.

Moreover, I loved the way Gaiman told the story.  I’m not just talking about the language and cadence of the text; I’m talking about the way he spoke, the way he gave life to his characters by changing tones and inflections to give them depth, real meaning.  For instance, I could tell the difference between Loki and Thor with just a word, because Gaiman imbued them with such distinct personalities.  Likewise, I could envision the enormity and ferocity of Fenris just through his harsh, graveled tones; or the haughty elegance of Freya; or the cool, calculating intelligence of Loki.

Personally, I thought Norse Mythology was fantastic.  After reading The Gospel of Loki by Joanne Harris, I have found myself captivated by Norse myth more and more—and Norse Mythology only lifts these myths higher in my esteem.  Although I know some of the stories, Norse Mythology is a wonderful addition to any collection and it’s great for readers who are both familiar with the myths and those who are just starting.
Posted by BPL Ref at 10:27 AM