The Wanderers by Meg Howrey 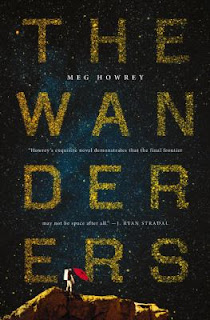 For all of human history, people have looked toward the stars and imagined.  As technology has advanced, we have constructed and flown rockets upward to escape the bonds of earth.  Sometimes it seems as though the difficulty of space travel might not be so much the logistics of how to get there, but the adaptation of the human mind to face the psychological challenges.

Aerospace giant Prime Space is ready to send the first humans to Mars.  To prepare for their travel and taking the first steps upon an alien word, Helen Kane, Yoshihiro Tanaka, and Sergei Kuznetsov examine the lengthy isolation and multiple challenges they will face.  Prime Space places the three into a very realistic simulation of the trip; using virtual reality it will seem as though they are traveling from Earth to Mars, moving about on the red planet, then returning to Earth, all while never leaving the Utah desert.  All the while, Prime Space observers are watching their reactions to mechanical problems and emotional stresses.  For seventeen months, Helen, Yoshi and Sergei live as though they are truly making a journey where no one has gone before.

I read this book as part of the Book Bingo challenge: Read a science fiction novel.  I enjoy science fiction, although I don’t read it on a regular basis.  The idea that this was a scenario which could happen in the near future and that the main part of the action was psychological intrigued me.  Meg Howrey depicts the journey in a real and atmospheric way.  It really felt that they were in space, to the point where the characters even questioned whether or not they remained in the hot, dusty Utah desert.  Indeed, I was questioning whether Prime Space might have actually launched them in a trajectory toward Mars.

Helen, Yoshi and Sergei all grapple with their emotions, even as they try to keep any visible sign from each other and from the Prime Space observers.  They each want to prove that they can handle the upcoming real mission without psychological strain.  The characters are slowly revealed through their memories and the actions of their loved ones who are left “back on Earth” but are able to send periodic communications.  The stakes intensify as they move through the simulation.  When they complete their dress rehearsal, will they better understand how difficult and dangerous a trip to Mars will be?

A gripping and compelling novel, The Wanderers kept me reading late into the night.  BPL Book Bingo seems to be doing that to many of us here at the library.  We may be sleep deprived, but we have plenty of books to discuss and share with others.
Posted by BPL Ref at 9:35 AM