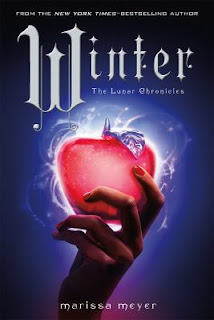 Shortly after the New Year, I finished reading Winter by Marissa Meyer.  At just over 800 pages, it fit nicely into the “over 500 pages” category on my list—and, confidentially, I couldn’t be more excited.  As the conclusion of the Lunar Chronicles, which spanned four books (including Cinder, Scarlet, and Cress) and spawned a novella (Fairest) and a short story collection (Stars Above), Winter is the book I’ve been waiting all year to find and, yes, read.

In Meyer’s latest novel, I had the opportunity to finally meet Winter, princess of Luna.  She’s the step-daughter of Queen Levana, ruling monarch of the Lunar colony; moreover, she’s the cousin of the lost princess, Selene (who’s very, very important to the story, trust me).  Several years ago, she vowed never to use her bioelectric manipulative powers again—which means she’s slowly losing her mind—and she quietly rebels against the queen by frequently feigning bouts of insanity, protecting unexpected allies, and, in general, causing a nuisance in the court.

I loved the whole concept of Winter, the mixture of fairy tale and science fiction that originally enchanted me in Cinder, and I absolutely loved the story.  Winter is an unusual character:  she’s totally batty, but she’s genuinely nice and she’s surprisingly adept at thwarting Queen Levana’s wishes, considering she’s spent a number of years under her stepmother’s thumb (and suffered terribly for it).  Overall, I was inordinately pleased to get my hands on a copy and add it to my collection—and I couldn’t wait to see what Meyer would do with the traditional “happily-ever-after.” 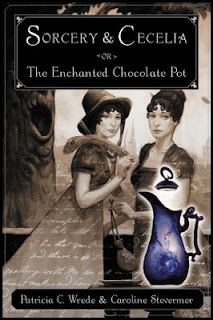 Next, I read Sorcery and Cecelia; Or the Enchanted Chocolate Pot by Patricia C. Wrede and Caroline Stevemer.  Although Wrede and Stevemer’s novel technically falls into the realm of fantasy, given the permeation of magic and wizardry, I think (read:  executively decided) it can probably be construed as a historical fiction novel.  Being set in England in 1895, it’s at the very cusp of the 19th century.  So, yes, I really think it qualifies.

Sorcery and Cecelia is a strangely pleasing novel.  Think Jane Austen, but throw in a bit of wizardry and magic for spice.  It’s an enjoyable little story that features the exchange of letters between Cecelia and Kate, cousins who share an adventurous spirit—and fiery attitude.  Their correspondence begins at a bit of a slow pace, but, once the schemes of Miranda Tanistry begin to unfold, the adventures picks up pace and soon Kate and Cecelia are drawn into a twisted web of danger and deception—and, of course, intrigue with a distinctively Victorian flavor.

It’s an immensely satisfying story, and I was ultimately thrilled by the novel.  It appealed to my love of classic English literature and fantasy without compromising on either one.  Although I was initially hesitant to begin Wrede and Stevemer’s novel (for the slow pace, mind), I’m glad I stuck with the story and completed it.  It was surprisingly enjoyable and, I’ll point out, exceedingly fun. 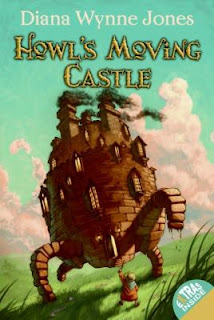 Last, I finished with Howl’s Moving Castle by Diane Wynne Jones.  Finding a book I wanted to read and watch onscreen proved a trifle more difficult than either entry listed above.  Howl’s Moving Castle is both a classic young readers novel by Jones and an animated movie directed by Hayao Miyazaki.  Having watched Miyazaki’s movie in the past, but needing a refresher, I decided it would be appropriate to pick up Howl’s Moving Castle and decide whether the book or the movie is ultimately the best.

Except I don’t really have an answer.

Howl’s Moving Castle as a book and Howl’s Moving Castle as a movie are two very different beasts.  First, they are very different formats and have their own merits as such; two, they tell different stories; and, three, the characters feel (and look) completely different that I have a hard time classifying them as the same individuals.  For instance, in the book, Sophie is quiet and mousy as a young woman, but she’s an outspoken curmudgeon when she’s morphed into an old woman; however, in the movie, she’s pretty quiet throughout and she’s more like a doting grandmother, rather than the nosy old grouch I’d come to know and love.

Likewise, the stories have an entirely different flavor to them.  In the book, the Witch of the Waste is a real threat.  Her machinations have directed the kingdoms toward disaster and put Howl’s loved ones in grave danger (and, yes, Howl does have loved ones outside Ingary).  Howl is, in fact, running from his responsibilities and putting a number of miles between himself, the King of Ingary, and the Witch of the Waste—and the curse she’s heaped upon him.  But in the movie, Howl is caught in the midst of a war and the Witch of the Waste, while still a daunting figure, is certainly not up to challenging Howl, less so the Wizard Suliman (who is of a different gender entirely in the novel, but that’s another story). 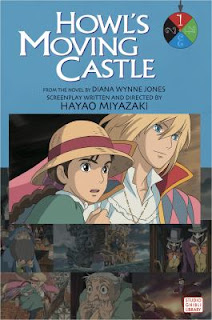 Anyway, as I said, I can’t really pick which one is better.  Miyazaki’s creations is wonderful:  beautiful animation, an intriguing and compelling story, and a whole heaping of creativity that takes a story and gives it wings—quite literally.  And Jones’s book is absolutely lovely:  magical and creative, full of quirky characters and fabulous stories and a winding, weaving plot that’s sure to keep readers on their toes.  Both are equally wonderful and entertaining, but if I lean more toward appreciating the book, I can only say I like it best for the fact that I can physically hold it in my hands and let my imagination truly wander.
Posted by BPL Ref at 12:14 PM