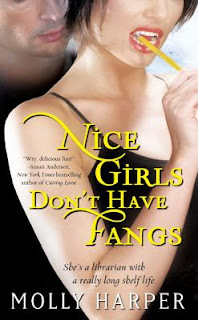 
Jane Jameson is just an average, everyday nice girl.  She works her tail off as a children’s librarian, she loves small, fluffy animals, and she adores Southern food.  But when her horrible boss fires her and hands her a gift card to a local bar, rather than a severance check, Jane decides she doesn’t want to be a nice girl anymore.  Her day just couldn’t get any worse—until, not surprisingly, it does.

Mistaken for a deer, shot, and left for dead on the side of the road, Jane wakes up with a terrible hangover and an unexpected thirst for blood.  Thanks to a stranger she met at the bar—after buying potato skins and chugging neon cocktails—she’s now part of the Undead community.  For better or worse, her life is changed forever.  With her recently deceased aunt as a ghostly roommate and a series of vampire murders inexplicably connected to her, she decides it’s definitely time to stop being such a nice girl if she wants to survive this ordeal.

I enjoyed Nice Girls Don’t Have Fangs pretty well.  I like that it had a sassy, self-sufficient female lead.  I mean, how can I not like her?  She’s a librarian, for crying out loud, and she’s a genuinely nice (and, dare I say it, funny) narrator.  I was perpetually intrigued by what would happen next—and I couldn’t wait to see the author’s take on vampires as they come out into the open and try to live normal, fulfilling lives.

Yes, I realize this idea has been used before—Sookie Stackhouse, anyone?—but I actually enjoyed Molly Harper’s novel a little better than Charlaine Harris’ series.  Perhaps that’s blasphemy, considering the outrageous popularity that True Blood found on HBO; however, there’s something about Harper’s style of writing and Jane Jameson’s character that I simply found more appealing.

Jane is a little more fleshed out than the more popular Sookie Stackhouse, I thought, and she strikes me as being a lot brighter if a little clumsier.  Sookie struck me as too perfect, self-deprecating and unrealistic with her heavy, affected Southern accent; Jane is clumsy and, one might say, goofy, but she’s equally intelligent and, while she has an intense love of Southern food and makes note of her accent, it isn’t forced.  Her character seems more natural.

And I liked her better for it.

Admittedly, I will say it isn’t a great story.  I mean, it has a decent plot and enjoyable characters, but I wasn’t thrilled or holding on to the edge of my seat the entire time.  It was fun while it lasted—and I certainly liked that Harper played with the vampire myth a little more, utilizing both traditional and pop culture ideals; however, I wasn’t smitten with the series.  I could keep reading it, but it’s sort of a paperback guilty pleasure:  lots of fun, good characters, just not a whole lot of substance.

Overall, Nice Girls Don’t Have Fangs was an enjoyable book.  It’s a short, quick read, which I finished within a matter of hours, and it’s a short series that builds on the local vampire population without overwhelming me with information—or, more importantly, confusing me with all the vampire rules.  I was able to comprehend and enjoy the story without feeling like I was missing something.
Posted by BPL Ref at 10:03 AM