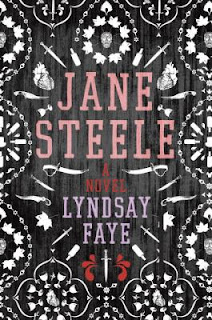 
Jane Steele, like her heroine Jane Eyre, endures abuse at the hands of her horrible aunt and her predatory cousin; however, unlike her more demure literary contemporary, Jane Steele takes matters into her own hands—and retaliates.  She fights for her life at a grim school, before she escapes to London and leaves her tormentors behind, and spends her time writing “last confessions” and penny dreadfuls.

One day, she discovers an advertisement, an opening as a governess at Highgate House—her familial home, her understood birthright—for a Mr. Charles Thornfield, an army doctor recently returned from the Sikh Wars.  Using the pseudonym Jane Stone, she steps into her old childhood home and meets some of the most unusual people—and she finds herself feeling at home for the first time in her life.  But, as she begins to fall in love with Mr. Thornfield, a gruff and tragic figure to rival Jane Eyre’s Mr. Rochester, she realizes with growing panic that the bodies she left behind are not buried as deep as she hoped.

As I am an ardent fan of Jane Eyre, I found myself equally enchanted by Lyndsay Faye’s Jane Steele, but for entirely different reasons.  Unlike Jane Eyre, who lives with the hand she is dealt, who makes the best of a bad situation, who is uncompromising in her faith and her belief in herself (and, more importantly, holds herself to a rigorous moral standard), Jane Steele is a grievously flawed individual—and, most notably, a murderer.

She takes justice into her own hands, killing those who threaten and torment her.  She’s a very different sort from the quiet, plain Jane Eyre who wins the heart of Edward Rochester and readers alike; rather, Jane Steele is tough and brazen, she’s street smart and savvy, and she’s a crafty, witty narrator who refuses to back down from a challenge.

Not as much as Jane Eyre, mind you.  There’s something about Miss Eyre that makes her incomparable, something about her stalwart character that appeals to me on a personal level.  She remains true to herself and her heart.  And, for the era in which she lived, she’s exceptional in that regard—and she will always seem exceptional to me.

But Jane Steele was enjoyable in her own way, because, when she decides to make her own way in the world, she thwarts social convention.  Like Jane Eyre, she stays true to herself (even if it’s her more “wicked” desires that manifest).  Perverse and humorous, Jane Steele is an interesting storyteller with a vicious wit and unflinching honesty.  She recounts every gory detail, letting readers soak in the viciousness of her character—and the inordinate satisfaction of seeing justice served to those who believe they will suffer no consequence for their actions.

Jane Steele has a smart mouth and a strong (rather foul) vocabulary, and she has an unexpected talent for storytelling.  She’s clear, she’s concise, and she’s candid, which makes her an excellent narrator and her story all the more riveting, the mysteries surrounding her all the more compelling.  I enjoyed watching her story unfold, enjoyed watching as mysteries unraveled and the plot came to a bloody climax.

And, yes, there is quite a lot of blood and gore.  I mean, it’s not entirely unexpected, since Jane Steele makes a point of warning readers at the beginning of the book that she’s a serial killer.  She doesn’t attempt to hide her true colors—or any number of sins she commits.

However, I will point out that I wasn’t bothered as much by the gore as the fact that Jane Steele is something of a spin-off of a favorite classic, which reflects in the writing.  It falls into much the same category as Pride and Prejudice and Zombies, Sense and Sensibility and Sea Monsters, and Meowmorphosis, but, luckily, Faye’s novel does manage to set itself apart.  It has some similar qualities, maybe even familiar names and text; however, I will note that Jane Steele is unique enough and filled with original writing that makes it enjoyable without feeling the work borders on plagiarism.

Overall, I was thrilled with Jane Steele.  It’s certainly given me something to think about in regards to the pair of Janes who both adorn my bookshelf and who have managed to find a place in my heart.
Posted by BPL Ref at 10:10 AM