The Puffin of Death: A Gunn Zoo Mystery by Betty Webb 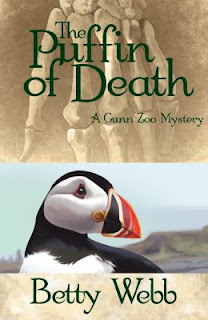 Zookeeper Teddy Bentley is dispatched to a zoo in Iceland to pick up some new animals for the Gunn Zoo’s new “Northern Climes” exhibit:  a polar bear cub, two arctic foxes, and a pair of puffins.  She’ll be staying with her Icelandic counterpart, a young woman named Bryndis, who will show her the finer points of caring for the animals while paperwork goes through.

Also visiting Iceland are a group of American birdwatchers from Texas who are being treated to this trip by Simon Parr, a member who just made a bit of history by being the winner of the largest Powerball jackpot, some $600 million dollars.  Teddy noticed him because of his belligerent attitude at a bar and his Elvis sideburns.  The latter makes it easier to identify the body, especially after a protective mother puffin has had at it when he landed face first in her burrow. When the Icelandic police pick up Bryndis’ boyfriend on suspicion of murder, the young woman begs Teddy to solve this murder as well.  It seems her reputation has preceded her. Before long, Teddy is mingling with the other tourists, trying to figure out if someone had a motive for murder.

It turns out that motives abound.  It would be harder to find someone who didn’t have a grievance.

As with most cozies, coming up with a reason why the amateur sleuth should become involved can be a bit dicey.  I thought this one did quite well in that department; besides being asked to intervene by her new friend, Teddy has a bit of an advantage over Inspector Thorvaald Haraldsson because she is an American, just like most of the suspects. Naturally, the Inspector is not swayed by her arguments, however, and insists that she stay out of the investigation.

I always find the Gunn Zoo Mysteries to be entertaining. I like learning about various animals, and enjoy how Betty Webb likes to surprise us, choosing animals we don’t usually think of as being dangerous or deadly and proving us wrong.  However, this one is my favorite to date.  While I like the usual cast of characters, it was refreshing to have Teddy out on her own, without having to put out various family fires (so to speak). I like that she’s in a stable and happy relationship with Joe, without the too often typical relationship drama --manufactured or otherwise. They also respect each other, which is wonderful.

But it’s Webb’s use of the Iceland as a location that elevated this book for me.  I thoroughly enjoyed the descriptions of Icelandic society, customs, food, and terrain.  Since the population is small, everyone is related one way or another; there’s even an app for that, to determine how closely two people are related before they start dating.  Teddy learns about the casual flirting that goes on a great deal, the vibrant music scene, Iceland as a preferred location for shooting all sorts of movies and TV shows, and more than she wants to know about volcanos.  The people live large there, it seems, but despite some fondness for a good brawl, murder is almost unheard of among the natives.  The only two murders in the country in the entire previous year were both committed by non-Icelanders.

Even though I’m not much on cold weather, Webb has convinced me that Iceland would be a fun place to visit, if just to watch the locals dress up as Vikings and ninjas for the cameras.

You don’t need to have read any of the other books in the series to enjoy this one.
Posted by BPL Ref at 8:59 AM