Rock With Wings by Anne Hillerman 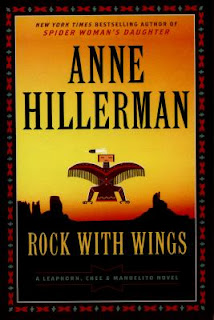 Reviewed by Jeanne
In her second book, Anne Hillerman sends Sergeant Jim Chee and his wife, Officer Bernie Manuelito, off for a few days’ holiday in Monument Valley.  Chee will be helping out a cousin who is trying to get his photography tour company off the ground, but there still should be plenty of time for the couple to do some sight-seeing and to relax.
Of course, that’s not the way it turns out. Bernie gets a call that her younger sister has not come home, leaving their elderly mother by herself.  Bernie heads back to Shiprock to check on the situation while Chee continues to help Paul. That is interrupted when he’s asked to look for a young woman who has disappeared from the set of a motion picture company filming in the Valley.  He finds her, but he also finds something that looks suspiciously like a grave
Meanwhile, Bernie is trying to deal with her younger sister who ended up in jail after a night of drinking and who may not be reliable enough to take care of Mama. Bernie has returned to work only to stop a man for speeding.  His behavior is so suspicious that she arrests him, but a search of the car reveals only boxes of dirt.  What could be so important about dirt that he’d try to bribe a cop?
As a long time fan of Anne’s father Tony, I had some concerns when I learned his daughter would be continuing his beloved series about Joe Leaphorn and Jim Chee.  While I enjoyed the first book, I felt that some of the passages were tentative, that she wasn’t entirely comfortable writing about characters her father had created.  I was made even more uneasy by the fact that Joe Leaphorn, the “Legendary Lieutenant,” was shot in the head and suffered a brain injury. There was just something different about the series, something I couldn’t quite articulate.
However, in A Rock with Wings, Anne has made the series her own.  The relationship between Bernie and Jim as well as their relationships with the rest of their families is crucial to her books.  I think this was the difference I was noticing it in the first book:  an emphasis on family and family relationships.  There’s a stronger emotional component to Anne’s books, while Tony’s writing was cooler, a bit more removed.
Another factor I appreciated is the way that the Navajo are shown to be modern people. Sure, some people still live in hogans and many respect tradition but they also use computers and cell phones, wear sweat pants and watch television.  The problems on the reservation aren’t minimized—alcohol and drug use, the school drop-out rate, the lack of jobs—but neither do these problems define them as a people.
This impressed me because I’m on a children’s literature list and one of the frequent complaints has to do with the way Native Americans are portrayed.  For the most part, Natives appear either in historical settings or as a stereotypical stoic, “spirit of nature” sort, not someone who interacts easily with modern technology.  Critics point out that Natives aren’t frozen in time, that their cultures are vital, vibrant,  and continue to grow, impacted as much as anyone else by modern technology.
I particularly enjoyed the settings here, with the background information on Monument Valley, site used for filming some of the best known motion pictures—Stagecoach, for example. There are some evocative descriptions of the landscape. Hillerman weaves an assortment of mysteries together, highlighting and explaining a number of current issues from solar power to tourism to social problems.  I’m glad to say that Joe Leaphorn is recovering from his injury and is able to offer some guidance this time around.
In short, I found it to be a very satisfying tale and one which can be read without having read any of the earlier books.
Posted by BPL Ref at 9:01 AM