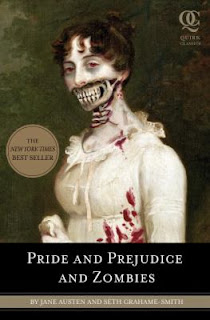 A unique twist on Jane Austen’s classic, Pride and Prejudice and Zombies offers a book filled with zombies, romance, gun-toting and sabre-swinging Bennet sisters, and ninjas—yes, zombies and ninjas.  Once a story about surviving the convoluted social strata of polite, English society, Seth Grahame-Smith’s new novel offers a different kind of survival story that’s set in a post-apocalyptic world littered with the walking dead.

Some aspects of Grahame-Smith’s novel are uproariously funny, not least of all for combining the demure English society of Jane Austen’s Pride and Prejudice with horrible, flesh-eating zombies.  (Because, let’s be honest here, it’s quite a great combination.)  From the first, iconic line which is twisted to suit the author’s needs—“It’s is a truth universally acknowledged that a zombie in possession of brains must be in want of more brains”—to the rather dirty humor he inserts into the tale, Pride and Prejudice and Zombies is in a class all of its own.

Pride and Prejudice and Zombies forges its own genre, so to speak.  It combines classic, Regency literature and zombies, horror and romance, and throws in a dash of overly dramatic kung fu.  So, while this novel isn’t entirely typical, it manages to remain interest, absurd, and highly hysterical, especially when Elizabeth refers to Mr. Darcy as being “English in all the right places.”  I must admit that I cackled over that line more than I probably should have, but I found I couldn’t help myself.  The Elizabeth of Grahame-Smith’s novel makes such a huge break from the mild-mannered miss created by Austen, and I found it delightfully surprising.

While I enjoyed Pride and Prejudice and Zombies the first time, I found that I appreciated its appeal less and less.  It does have several merits for its absurdity and its originality—which spawned countless reimagined classics, like Sense and Sensibility and Sea Monsters, Android Karenina, and The Meowmorphosis—but, truthfully, it’s a bit of a knock off.  I mean, Grahame-Smith essentially transplants Pride and Prejudice and liberally sprinkles in the words “ninja” and “zombie” and “flesh-eating,” upgrading the Bennet sisters from prim, proper country girls into tough, efficient zombie hunters.

I won’t say that it’s plagiarism, since Austen is credited for her work, but it’s a thinly veiled reimagining.
Posted by BPL Ref at 8:08 AM