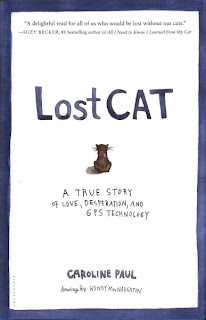 When the doctor told Caroline Paul that she’d broken her fibula and tibia in the crash of her experimental aircraft, she started laughing.  This confused the medical staff.  They weren’t reassured by her explanation that those were her cats, thinking that she was “just another numbskull hallucinating on a gurney.” But Paul did have two cats, Fibula and Tibula, aka Fibby and Tibby, brother and sister tabbies. Fibby was the lapcat, queen of all she surveyed, while Tibby was an anxious fellow, apparently sure that danger lurked everywhere.

Finally released to recover at home, things are really beginning to look up and then Tibby goes missing.  Paul is frantic.  Hobbled by her injuries, she’s unable to search for poor Tibby herself, but friends put out flyers and search the neighborhood.  Paul even calls a pet psychic, all to no avail.

Then five weeks later, Tibby strolls back inside.  He’s none the worse for wear—in fact, he looks sleeker and fatter.  He seems more confident, a feline swashbuckler.  Where on earth has this cat been?

Determined to find the true story, Paul and her partner, artist Wendy MacNaughton, try to unravel the mystery of Tibby’s travels.

Lost Cat is a brief book, one I finished in under an hour, but I found it to be a most enjoyable hour.  People have differing ideas of humor, but for me Paul is laugh out loud funny, even when cataloging her misery.  She’s thrilled when Tibby comes back but where has he been?  Was he locked up in a kitty jail?  Was he enticed with some fabulous exotic cat treats and then hooked like an addict? Is he still two-timing her with someone else? Is it possible that. . . that. . . he loves someone else MORE?
I probably should be ashamed to admit this, but I understood all those emotions perfectly. In fact, I may have taken a few notes about some of the ways they tried to track Tibby. Now if I can just get Fred to wear a collar so I can attach things to it. . . .  (Melon would wear a collar but I don’t need a GPS to find Melon. I just look at the food bowl or the couch.)

MacNaughton’s illustrations are as delightful as the text.  I especially liked the map of a cat’s eye view of San Francisco as envisioned by a cat owner: Home, Loud Kids, Food?, Worry, Terror, Damnation, Total Death, and so forth.  There is a sad incident in the book, but for the most part it’s a very funny, very creative book about the lengths pet lovers will go for their animals. Lost Cat is catnip for cat lovers. I have to buy copies for myself and for some other folks I know.
Posted by BPL Ref at 11:42 AM