Llama of Death by Betty Webb 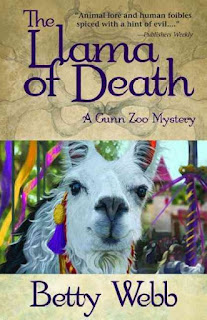 The Llama of Death by Betty Webb is the third in the “Gunn Zoo Mystery” series.  Theodora “Teddy” Bentley has been roped into managing the llama rides at the Renaissance Faire which means that participants must dress up in period costume and try to remain in character.  Teddy is trying to manage Alejandro, a formerly abused llama who dislikes adult humans but adores children.  Fortunately, Alejandro tolerates Teddy most of the time and only spits on her occasionally.

Things begin to get a bit tense when Teddy’s flamboyant mother, Caro, is informed that she’s been demoted from playing Anne Boleyn to generic lady in waiting by Victor Emerson, the owner of the local wedding chapel who is portraying Henry the Eighth.  Caro is furious, and makes no secret of her displeasure.  That night Teddy discovers Victor’s lifeless body in the llama pen along with a very upset Alejandro.  Teddy’s initial relief at the discovery that Victor died from a crossbow bolt and not from a llama stomping evaporates when Caro is arrested on suspicion of murder.  Just when it seems things can’t get any worse, her father shows up to try to help get Caro out of jail.  Since Dad is a wanted fugitive from justice after embezzling millions, the next Bentley family reunion might take place in prison. Things only get murkier when it’s discovered that Victor wasn’t who or what he professed to be: notably, he was not licensed to perform marriages, leaving a whole lot of people with a whole lot of motive.

As with earlier books in the series, Webb manages to pack in a lot of information about animals in the book in a painless and entertaining way.  It’s like getting a sneak peek behind the scenes of a real zoo, where you see not just the nice animals but the sheer amount of work that goes into keeping animals reasonably content and healthy.  Webb also makes sure that readers understand just because an animal is cute doesn’t mean it can’t be deadly if handled the wrong way. The characters are entertaining and run the gamut from sensible Teddy to her flamboyant parents. Usually Webb’s characters also have more to them than meets the eye as well. While the animals have personalities, none talk (with the possible exception of an escaped snake who tweets her activities) and are realistically portrayed.
The “Gunn Zoo Mystery” books are fun and painlessly informative books which should please cozy mystery fans and animals lovers. The two earlier entries are The Anteater of Death and The Koala of Death.  Webb also writes a grittier mystery series with private investigator Lena Jones, all of which are set in the Southwest and involving more controversial themes such as polygamy.
Posted by BPL Ref at 11:19 AM