And Everything Nice by Kim Moritsugu 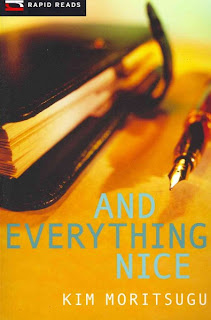 Orca Book Publishers has introduced a line of short novels and non-fiction books called "Rapid Reads." The idea behind Rapid Reads is to provide well-written books that can be read at one sitting. Appealing to a diverse audience including ESL students, adults who struggle with literacy, and reluctant readers, as well as anyone who is simply interested in a quick, gripping story, rapid reads focus on strong writing and storytelling.

One of their selections, And Everything Nice by Kim Moritsugu caught my eye recently.  I was intrigued when I saw it, wondering who had let this tiny “pretend novel” into our library. Of course, to see what it was all about I did what I always do, which is read the first few sentences. That’s all it took, and I was hooked. This book was quick and easy to read, but strangely gripping from the first page.

Stephanie, the primary character, works as a store manager at a mall. How could a book about someone who works in a mall be this interesting? Gee, it must have something to do with good writing. I suppose you might call this a small thriller. No FBI. No CIA. No Secret Service. No Mafia. Just a chick who works at a mall, joins a community choir, and is suddenly involved with a local television personality who is embroiled in a blackmail plot, as in someone is blackmailing her.

Anna, the blackmailee, barely knows Stephanie, but turns to her for help after she discovers someone has stolen her personal diary and plans to extract cash from her in exchange for its return. Stephanie helps Anna conjure a plan by which they will pretend to go along, but in the end catch the blackmailer who turns out to be someone who sings with them in the choir.

The book begins with a prologue that initially seemed a little baffling to me. After reading the first few paragraphs of chapter seventeen I was compelled to go back and read it again, and everything began to fall into place.

So! Once that nasty blackmail business is resolved, we’re done, right? Wrong! That’s not the whole story. The blackmail, the blackmailer, and the blackmailee may have been settled down, but there’s still the issue of Stephanie’s personal ambition. This story is fun, because you think you know where it’s headed but then it gets a little twisty in the last few pages. Is Stephanie honest or not? Does Stephanie get what she wants by being dishonest or by taking the high road?