Beyond Confusion by Sheila Simonson 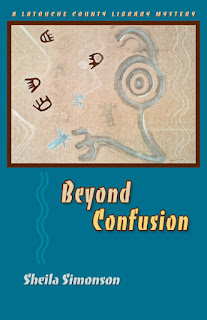 Marybeth Jackman is one nasty piece of work. She’s a bully who loves to spread innuendo, create rumors, and generally force the world to go as she would have it. She's a master of pitting staff members against each other and is expert at exploiting secrets and weaknesses. She’s a nightmare to work for or with, but as Meg McLean points out, she’s a nightmare with seniority.  Meg is the director of the Latouche County Public Library, but she’s a relative newcomer.  She also has the job Marybeth believes should have been hers, and Meg suspects Marybeth is attempting to undermine Meg in the community. Still, it’s quite a shock when Marybeth is killed in a fall—and it’s even more shocking when it begins to look as if that fall was not accidental.

At the same time, a house is vandalized in what might be a hate crime against the Klalos, a Native American tribe in the area. The house in question is about to be renovated and turned into a library/cultural center for the tribe.  Are the two incidents related? Or is it a coincidence?  Meg’s significant other, Undersheriff Rob Neill has much to investigate while Meg tries to find out just how much damage Marybeth has wrought.

Simonson does a good job of making this mystery seem more realistic than many cozies.  Meg does actual library work! The relationship between Meg and Rob is solid, and each respects the other’s work:  Meg doesn’t decide Rob needs her help to his job, for instance.  This makes a nice change of pace from books where an author tries to create tension by putting the couple at odds over the woman’s desire to investigate a mystery. Caution is one thing, but cliché is another. One of my favorite passages in the book has a weary and emotionally drained Meg realizing that Rob is going to age very well and she isn’t, that soon people will see the two of them and wonder what he sees in that old woman.  Simonson writes, “It was an index of her desolation that the thought did not provoke in her the slightest urge to laugh.” It’s so nice to have a woman secure enough that her normal impulse would be to laugh instead of requiring massive reassurance of her desirability.  In fact, it’s just nice to have characters with a bit more maturity than I’ve seen in a number of light mysteries.

Other pluses include excellent use of the Columbia River Gorge setting, a mixture of wild beauty and icy chill. The Native Americans are portrayed as modern people in a modern world. Their chief is a woman, and a savvy politician. The non-Native characters seem respectful of Native culture, and stereotypes were avoided.

The book flowed very well indeed, and it had me turning pages to see find the solution. Occasionally there were too many minor characters running around but it wasn’t enough to be annoying. Most of the investigation was left to the professionals and Meg didn’t go off half-cocked.

Not to give away any spoilers, let me just say that the last part of the book was written for all of us who love libraries.  It made me want to cheer and left me with such a good feeling that now I want to read the other books in the series.

In short, I found Beyond Confusion to be a cut above many of new light mysteries, too many of which seem to be created in cookie cutter fashion. Good characterization, well-considered plot, and vivid setting make this a book worth reading and recommending.

Beyond Confusion is the third in the series of “Latouche County Library Mysteries” but can be read as a standalone.  The other books in the series are Buffalo Bill’s Defunct and An Old Chaos.
Posted by BPL Ref at 1:35 PM