The Master and His Emissary by Iain McGilchrist 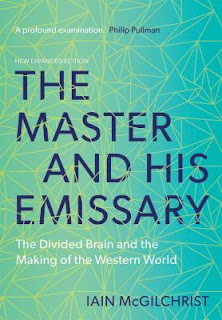 The Left Brain is analytical and the right brain is creative! I’m sure you’ve heard something like this before. Well, it’s not true! (Or it kind of is but its way more complicated than that!). The Master and His Emissary by Iain McGilchrist delves about as deep as any popular science book could go into this topic.

The book is divided into two halves, the first being centered on the research and experimental evidence for what and how the hemispheres of the brain work, and the second being McGilchrist’s argument that the left brain is dangerously over-represented in our current society. I found the first half much more engaging and coherent than the second, but never did I feel like putting the book down and not finishing it up.

The book is full of fascinating information on recent research into how the hemispheres of the brain interact and coexist, which I feel is its greatest strength. I’ve read other books on the subject that cover research on split-brain patients, who have had the connections between their left and right hemispheres severed to prevent severe epileptic seizures, but none of those other books went half as deep as McGilchrist does into this topic. Showing the right hemisphere an object and asking the patient what was seen results in the left hemisphere (who, being severed, will have no information on what has been seen) results in an answer that is clearly a lie and fabrication. That’s both scary and amazing!

On the other hand, it drifts (especially in the second half) heavily into McGilchrist’s opinion and conjecture on the history of western civilization, which begins to feel like long and myopic rambling as the chapters go on. It seemed clear to me that the author has studied the arts and music quite heavily, because he returns to these subjects repeatedly here and if feels a bit selective and narrow.

Despite its shortcomings, I feel like this book is absolutely worth a read, especially the first half. If you have any interest in what we can know about how our brains work and how they affect our decision-making and emotional lives, I 100% recommend checking out The Master and His Emissary.