So Cold the River by Michael Koryta 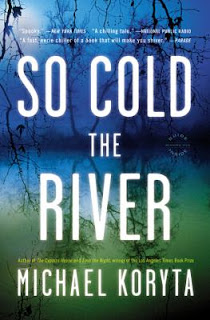 Eric Shaw once had a very promising Hollywood career which fizzled quickly after some “creative differences.”  His marriage is on the rocks.  The only work he can find is filming weddings and birthday parties.  He’s especially good at creating remembrances of people for funerals; in fact, he’s almost scary good. Besides his remarkable skill with a camera, he sometimes has a sort of sixth sense about things.  He’ll include a certain photo or a piece of music and then find out his instincts were right: that these things were extremely meaningful to the person.  He just knew. It’s almost creepy.

Now Eric has been given a new assignment by a woman who was impressed by his psychic insight at her sister’s funeral.   Alyssa Bradford’s very wealthy father in law is dying and she wants Eric to do a documentary on his life, something the family can treasure.  The problem is that Campbell Bradford has always been very reticent about his past.  They know he came from West Baden, IN and he has an old bottle filled with mineral water which he has kept for at least 80 years.  Alyssa hopes that Eric will be able to fill in some gaps.

Maybe that should have been Eric’s first warning.  Or maybe it should have been the bottle with the grinning devil imprinted on it, a bottle that seems to be getting colder and colder for no apparent reason.  Then there are the auditory and visual hallucinations—or are they hallucinations?—and the sense that someone or something else also seems to be making the journey to West Baden.

Michael Koryta has been on my To Be Read list for quite some time as an author of mysteries and thrillers.  Book Bingo had me pick this one up, and I’m glad it did.  This particular title leans toward horror which isn’t my usual genre but I definitely liked it.  It’s more creepy than gory, and Koryta lets the reader unravel the mystery along with Eric.  Koryta does an excellent job of gradually building the dark backstory, teasing the reader with bits of lore and gossip, until we reach the explosive conclusion.

There’s a good supporting cast.  I especially liked Kellen Cage, a young man who is also investigating the area’s history; and Anne McKinney, an 86 year old who knows a lot about the town’s history and who acts as a weather spotter. I like that Eric isn’t perfect but he is a basically decent guy; he’s let his pride and stubbornness wreck relationships but he’s honest enough to take responsibility.

Most of all I was fascinated to learn about the real town of West Baden. The descriptions in the book intrigued me: the mineral springs, once a thriving spa area, and the magnificent hotels which drew the rich and famous to West Baden and nearby French Lick.

I found it to be an entertaining page-turner of a book.  If you’re a hardcore horror fan, you may find this too tame, but if you just a few dark chills and thrills, this may be a book for you.

And if you want to check out the hotel, try this link:  https://www.frenchlick.com/tour/westbaden  The lobby and the atrium are incredible. The library—well, it was okay.  Not enough books for my taste.