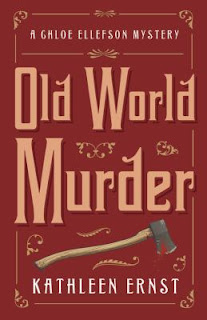 Chloe Ellefson has endured a traumatic break up and left a job she loved in Switzerland to try for a fresh start.  She’s just been hired as collections curator at Old World Wisconsin, an outdoor museum dedicated to showing how life was for the various European settlers.  Chloe’s job is to help the interpreters provide realistic portrayals, right down to using the correct sort of plates for a Norwegian farmhouse or the right sort of chairs for Swedish newlyweds.

She’s not exactly getting off on the right foot.  Her boss seems to take a dim view of Chloe’s organizational methods, and the security guard seems to find her suspicious.  Then an elderly woman shows up, distraught because she has been trying to locate a particular object that had been donated to the museum, a Norwegian ale bowl which had been in her family for generations.  Chloe promises to look for the item and get back in touch, but while leaving the museum the woman is involved in a fatal car crash.

Was it an accident? The police seem to think so, but as Chloe begins her search for the bowl it seems that someone is determined to keep its existence a secret—someone who might be willing to commit crimes, maybe even murder, to do so.

This is a first in series book, and acquitted itself well in introducing characters and providing a setting.  I found the behind the scenes look at how some of these outdoor museums work at training interpreters, equipping the buildings, and so forth to be enlightening.  I’ve visited the local Rocky Mount Museum several times and always appreciated the way the staff get into character and provide information. Seeing how the process worked was interesting, especially as it also provided a look at cultures I didn’t know much about.

All the information is wrapped up in a mystery which makes the learning go down easily.  The characters are well defined: Chloe’s pain drives her to sometimes make bad decisions, a fact which frustrates Roelke McKenna, the policeman who is called in to investigate.  Roelke, his sister tells him, is always trying to rescue people, and she thinks he’s seeing Chloe as someone who needs saving; it doesn’t matter if she wants to be saved or not.

All in all, this was a mostly satisfying read.  The qualification there is because a lot of information was revealed near the end. I did see why part of it was done that way, and appreciate the reason.  I’m going to be reading more of these.