Emily Henry: Beach Read and People We Meet on Vacation 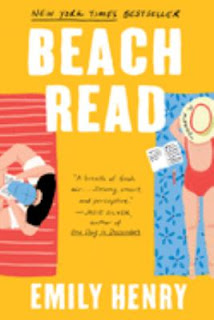 When writer January Andrews’ charmed life crumbles around her, she escapes to a beach house in her father’s hometown. A house, she has recently discovered, he shared with his mistress. A writer of romance novels, January has always looked to her parents’ seemingly happy relationship to reinforce her belief in happily ever after. She’s hoping time alone and a salty breeze can break her writer’s block. It doesn’t help that the cute grump next door is also a writer and also happens to be her former college writing class rival.

Beach Read is a fun and exuberant read that is not without weight. Its cheerful cover might belie its heavier themes but overall I think its view on love and life is ultimately optimistic. Henry’s writing crackles, and the banter between the characters is a lot of fun, albeit a little too “quippy” at times. I do think it’s a great choice for a vacation read if you’re in the mood for a romance that feels a little more substantial. (The beach should’ve been featured more though. It’s called Beach Read!) It’s also a nice entry in the “enemies to lovers” trope, which is typically not my favorite. But I liked it so much that I immediately checked out Henry’s most recent novel People We Meet on Vacation. 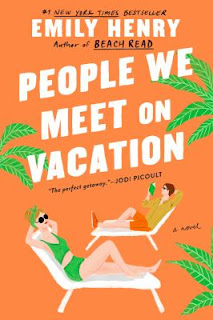 People We Meet on Vacation by Emily Henry

Speaking of tropes, People We Meet on Vacation is solidly “friends to lovers.” Poppy and Alex first met during Orientation Week at college. But it wasn’t until they needed to share a ride to their Ohio hometown that they became friends. Their friendship probably shouldn’t work. She’s a thrift-store shopping free spirit who can’t wait to leave Ohio and travel the world. He’s a khaki-wearing high school teacher who wants nothing more than to settle down and start a family. But they’re best friends, and they both look forward to their annual Summer Trip more than anything. Until Croatia two years ago. Until things got…complicated.

Henry isn’t breaking new ground with this storyline or anything, and sometimes the conflict itself feels a little thin and drawn out (Just say “I love you” already!) but it’s still a very enjoyable time in all the ways that Beach Read is. It’s also a much lighter read so if one is not in the mood to read about parental death or marital infidelity, this might be the better option. Reading these two books back to back has made me realize that Emily Henry is the kind of author I was wanting Sally Thorne to be. Thorne writes fun dialogue and snappy prose but some of her characters can be a little unlikable. I love unlikable characters in thrillers but not my romantic comedies!

Fortunately, I did not have that problem in either of Henry’s offerings. I liked everyone and wanted them to be happy. If I had to pick, I think I favored Beach Read slightly more but I would highly recommend throwing either one in your beach or pool bag.