Ripped From the Headlines: The Shocking True Stories Behind the Movies' Most Memorable Crimes by Harold Schechter. 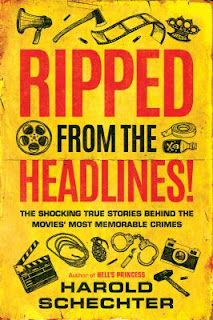 Schechter is the author of several true crime books, including Hell’s Princess:  The Mystery of Belle Gunness, Butcher of Men, which Christy reviewed previously.  Obviously, he has a way with titles.

This book is a collection of 40 essays listed by movie which have some connection to a true crime case.  Some are more easily connected than others, but all are fascinating.  Some are well known and obvious—Psycho and Ed Gein, for example—while others are less known.  I was intrigued to see Arsenic and Old Lace listed, so of course I had to read that one first and found that there was a case of a woman murdering boarders by poison, though she wasn’t nearly as charming as Cary Grant’s aunts in the film.  I didn’t know that Scream was influenced by Danny Rolling’s murderous rampage in Florida.

Some of the movies listed are sensational and with only a slight connection to a crime such as Eaten Alive!

Usually the essay begins with a recap of a movie, and then describes the real life crime behind it. Some of these have some graphic detail which I could have done without, but for the most part they are restrained and informative.  I was more interested in the movie aspect, and for that part Schechter offers both description and a bit of a critique.  There were a lot of movies I was vaguely aware of—I recognized titles, such as Butterfield 8—but really didn’t know much about the movie itself.  Now I want to see Double Indemnity, a movie written by Billy Wilder and Raymond Chandler, and starring Barbara Stanwyck and Fred McMurray.  I’m also curious about M, the 1931 Fritz Lang movie based on a child murderer which was a breakthrough role for Peter Lorre.  I wish I had read this book before stumbling on Shadow of a Doubt, the Alfred Hitchcock thriller starring Joseph Cotton; it would have given the movie an added dimension.

While one movie is highlighted, there are some crimes which inspired several films.  Some of those are also mentioned in sidebars.  The Leopold-Loeb crime was the basis for both the movies Rope and Compulsion, for example, and the notorious Burke and Hare were the basis for The Body Snatchers, The Doctor and the Devils, and at least two entitled Burke and Hare.

There is an index, very handy for checking which Hitchcock films made the list, or if a specific movie shows up in a chapter headlined by a different film.  I was surprised by how often Theodore Dreiser’s name came up. His book An American Tragedy (based on a real crime) influenced more than one film.

I intended only to browse this book, but ended up reading the whole thing.  The short chapters made it easy to put down and pick up again later. Overall, I would say this is more a book for film buffs than for true crime people, but that’s just my perspective: I read it more for the movie info than the murders.  Catalogers seem equally conflicted: our copy is in the true crime section, while another library has it in their film section.