Thor and The Mighty Thor by Jason Aaron, et al. 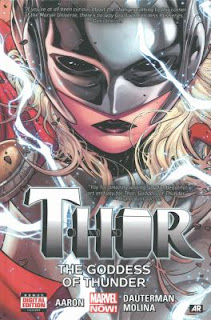 Thor and The Mighty Thor by Jason Aaron, et al.

Despite what my previous reviews would suggest, I didn’t spend all my time reading about pandemics and catastrophes.  Recently, I veered back into comic books and I finally – finally – made time for reading the full Jane Foster saga in Thor and The Mighty Thor.

Here is the exact series order:

During this storyline, Dr. Jane Foster is deemed worthy to wield the powers of Mjolnir and she becomes the new Goddess of Thunder – and just in time, too.  Malekith the Accursed, self-appointed King of Svartalfheim and the Dark Elves, has brokered deals with some of the worst villains and creatures in the Nine Realms.  If left unchallenged, Malekith holds the power to not only conquer Midgard but destroy Asgardia once and for all.

I was absolutely thrilled to reacquaint myself with my favorite thunder goddess.

Although I’ve read The Goddess of Thunder and Who Holds the Hammer? multiple times, I enjoyed rereading these first volumes and diving into brand-new stories.  I thought Thunder in Her Veins and Lords of Midgard were excellent sequels; in fact, I would argue the first volume of The Mighty Thor is a very strong contender for my favorite superhero comic of all time.

Unfortunately, once I ventured into The Asgard/Shi’ar War, I found the series pretty much fell apart and it never really recovered.  I barely glanced at The War Thor and I only skimmed the last few pages of The Death of the Mighty Thor, so I could see what became of my beloved Jane Foster.  The third and fourth volumes of The Mighty Thor seemed like so much fluff and filler, while the final volume felt grievously anti-climactic.

I loved Jane Foster as Thor.  I loved the artwork.  I loved the concept of a war between the realms with Malekith at the helm, and I loved the development of the original Thor – henceforth known as Odinson – and Loki as they attempted to navigate this new dynamic.  Sure, I had issues with the story:  how could Mjolnir give Jane phenomenal power but not cure her cancer?  Why would Odin trust Cul – his nickname was “serpent,” so clearly a bad idea?  Why are there so many plots and counterplots and characters I didn’t recognize?

I knew the series wasn’t perfect, but it had so much potential.  It’s a bit like watching a firework fizzle out, to be honest.  So much promise, so much expectation, and then it turns out to be a damp firecracker.

Although the series appears to continue with the War of the Realms crossover, I have no intention of exploring further.  While I might check out The Unworthy Thor, which appears somewhere in the middle of The Mighty Thor saga, I doubt I’ll ever fully return to the series – not unless Jane Foster returns in all her thunderous glory. 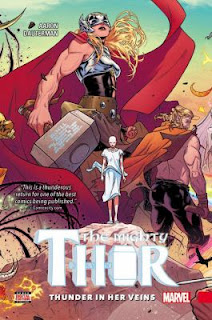