Nothing to See Here by Kevin Wilson 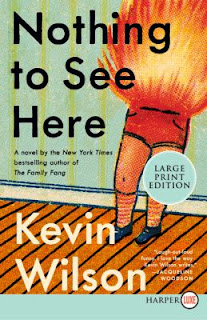 Lillian and Madison bonded when they were at a private school—Lillian because she got a scholarship and Madison because her family was rich and powerful. Yet the two shared a connection until a scandal sent Lillian packing and back to a hardscrabble life.  There have been sporadic letters, most of which Lillian doesn’t answer because while Madison is marrying Senator Roberts, Lillian is trying not to lose her job at the discount market.

Then Madison writes and begs Lillian to come and visit because she has a job for her.

Wary, but with no other prospects, Lillian sets out for Madison’s palatial house outside of Nashville, hereditary home of her husband’s family. It’s like something out of a movie: more rooms than Lillian can count, staff to cater to your every need, and being showered with stuff:  new shoes, new clothes, whatever.  There has to be a catch.

And that is that Madison wants Lillian to take care of her twin stepchildren, the product of the Senator’s first marriage. Their mother has recently died and they need to be taken in by their father—otherwise, it might look a bit strange to the voters and those doing the vetting for the Secretary of State position expected to come open shortly. It’s just that the children have some. . . issues. . . that will make it difficult to place them elsewhere, at least in the short term.

They burst into flame when they are upset.

The children aren’t harmed at all, but children who spontaneously combust are not exactly the image Madison and her husband wish to covey.

So Lillian’s job to watch these children.  Not inside the mansion, but in a guest house a safe distance away.

This book had been recommended by several people, so I decided to give it a try—especially since it would count for “New York Times Bestseller” in book bingo.  It’s been described as quirky, funny, and warm, and I would agree with all of those sentiments.  I will admit that I found it slow going at first but it picked up as soon as the children were introduced into the mix. Also, I listened to the audio version and I have to say that reader Marin Ireland did a fantastic job.  She made Lillian’s voice especially vivid; I could hear it days later.  She also did an excellent job of differentiating between sophisticated Madison, the two children, and various other characters, especially Carl who is Senator Roberts’ “fixer” and the Senator himself.  Be aware that the characters all tend to be a bit salty in their language.

The characters themselves are wonderfully complex and vivid.  I was left wanting to know more about what happened, which is the sign of a good book: satisfying but leaving you wanting more.  I even know what I want: a sequel set about twenty years in the future in which the twins tell their version of the story and we find out what happens with Lillian, Madison, and all the others.