Midnight in Chernobyl: The Untold Story of the World’s Greatest Nuclear Disaster by Adam Higginbotham 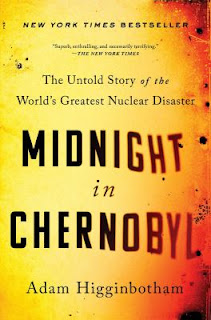 On April 25, 1986, the fourth reactor at the V.I. Lenin Nuclear Power Plant in Chernobyl experienced a complete meltdown.  Radioactive steam was thrown into the air and traveled hundreds of miles; radioactive debris was scattered in every direction; radioactive isotopes contaminated local water supplies, fields, roads, homes, pets, and people.  In Midnight in Chernobyl, Adam Higginbotham examines both the culture and the history of the Soviet Union leading up to the disaster and shines a light on all the men and women who survived.

I picked up Midnight in Chernobyl as an audiobook on Tennessee READS on a whim.  I’ve always been a little curious about Chernobyl.  I mean, I knew the reactor had experienced a meltdown and cause literally the greatest nuclear disaster in human history, but I knew little more than it happened and it was a very bad thing – and that there are irradiated catfish still living in the cooling ponds.  (I binge watched River Monsters with my husband one summer and discovered that fun fact.)

So, I decided I might as well give Higginbotham’s book a shot.  It had won some acclaim and it was considered the New York Times Best Book of the Year for 2019.  It seemed promising, plus, if I didn’t like it, I could just send it back.

Well, much to my surprise – or, perhaps, delight? – I found that I enjoyed listening to Higginbotham’s book.

Read by Jacques Roy, Midnight in Chernobyl dives deep into the catastrophe.  Even before he chronicles the meltdown in 1986, Higginbotham combs through the history of the reactor and examines the greed, the corruption, the unrealistic expectations and deadlines, and the shortcuts that eventually brought the reactor to its knees.  He also takes a look at the individual actors who were involved in the accident and the recovery efforts, providing incredible insight into the disaster from beginning to end.

Higginbotham does an incredible job piecing together the full story of Chernobyl, pooling interviews and official reports and more to create what feels like a comprehensive record.  Although it can occasionally feel a bit dense, Midnight in Chernobyl is packed with information and insight – and, even better, first-hand accounts.

It also does a spectacular job of depicting the jobs and lives of the “liquidators” – the sixty thousand plus workers who were tasked with cleaning up the radioactive debris field and building the “sarcophagus,” the lead and concrete coffin that would seal up Chernobyl’s reactor.  I found their stories particularly fascinating.

Overall, I enjoyed listening to Midnight in Chernobyl.  I think it’s well-written – and beautifully researched – and it’s incredibly easy to pass an hour or more enthralled by the narrative; however, I recognize it’s also daunting.  Clocking in at around fourteen hours, it’s a little longer than the average audiobook; likewise, its contents can be rather gruesome and stomach churning.  Chernobyl was a disaster – economically, scientifically, ecologically – and, as such, it did a lot of damage to a lot of people and Higginbotham doesn’t shy from depicting every horrifying moment.