One Last Lie by Paul Doiron

Please welcome back Kevin Tipple, long time reviewer and avid reader.  His blog, Kevin's Corner, is an award winning source of news and reviews of crime and mystery fiction. 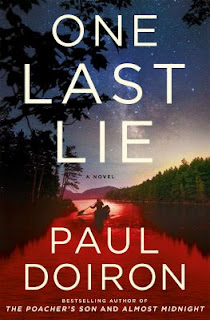 Maine Game Warden Mike Bowditch is in Florida due to a background check on a new hire and a little more when he gets a phone call from Ora Stevens. She is very concerned as her husband, Charles Stevens, has not been in contact with her for over 41 hours. The legendary Game Warden is not answering his phone and he had left her a rather odd note while she was sleeping. Something has him stirred up and she thinks she knows when it happened though what happened is a huge question.

During a recent trip, while they were separated, she thinks something happened as when he was back with her his mood had changed drastically. She thinks that he might have bought something from one of the dealers though she did not see him do it. By the next morning he had left, and she has no idea where he went or what he is off doing. Ora is very worried and reached out to Mike as he is family and she is alone and worried about her husband.  Charley is the father Mike Bowditch never had so there is no question he is dropping everything to come back and hunt for his mentor.

That hunt for Charley is what moves the plot and the action in One Last Lie: A Novel. Like the changing beauty of the Maine wilderness, the past is a constant theme in this series and it certainly is here. Whether it be the past in the form of his father, an old girlfriend, a cold case, or his history with Charley, among other things, looking back is a strong theme throughout the work. All those hooks into the past can make the present a bit shaky even before somebody tries to kill you.

Unlike many authors who has several books and then seen to have some reads that are not as satisfying, Paul Doiron continues to create intense and deeply moving installments in this series. One Last Lie: A Novel is no exception as it proves in more than one-way Charley Stevens is dead on right. He often is.

I received an ARC from the author with no expectation of a review.