That Affair Next Door by Anna Katharine Green 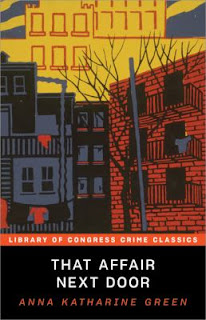 When a body is discovered in the house next door, Miss Amelia Butterworth takes quite an interest.  The family who owns the house was not in residence, leading to some questions as to how the unfortunate victim entered; but the more important questions are who was this woman?  And is her death an unfortunate accident?  Suicide? Or murder?

Miss Butterworth, with her keen observation and logical thought processes, determines quickly that this was no accident nor was it suicide but a very clever and vicious murder.  She tells the police detective, Ebenezer Gryce, this at once, but he seems to have some reservations about a spinster—even one of good family—being capable of detective work.  Miss Butterworth takes up the challenge, determined to prove that she is every bit his equal in deduction.

This book was republished as part of the Library of Congress Crime Classics series and after hearing Green praised repeatedly in the Dorothy-L mystery group, I decided I needed to give her a try.  I admit I was a bit hesitant; after all, a book written in 1897 might not be to modern tastes.  I was pleasantly surprised to find that it was indeed entertaining and I enjoyed the author’s sense of humor.   The book is very lightly annotated to explain a few minor details (for example, Miss Butterworth likes to wear “puffs” which was a hairstyle) and to put some things in context.  One scene that is at best cringe-worthy today involves a Chinese laundry, but the footnote describes the widespread fear of Asian immigrants—the “Yellow Peril”— of the time to explain though not excuse the attitude.

I was fascinated by the social conventions at the time of the book; one shock came when an adult female character explains that she longed for school and taught herself to read and write. I also was surprised by the importance of hats. There’s an ever present sense of the social hierarchy and adherence to a code.  There’s one scene in which a character lies repeatedly in a courtroom because he cannot admit there was any circumstance in which his wife would enter a house with a man who was not her husband.

Another strong component of my enjoyment was knowing that all the period details and sentiments were correct because the book is a reflection of its time.  When a 21st century author tries to write a book set in, say, the 18th century, I find myself second guessing some of the choices.  Would a character really believe this or that?  Is this how life really was at that time? In this book, I have no doubt.

Miss Butterworth is a delightful creation, a stubborn spinster who holds definite views of what is proper.  Her birth name was Araminta but she signs herself as Amelia because she is a sensible woman and not “the piece of antiquated sentimentality suggested by the former cognomen” who is of Colonial descent and therefore a social force to be reckoned with. This is not to say that she’s any champion of women’s rights—Green herself did not think women show have the vote—but she sees herself as the equal (if not the superior) of the police because of her intelligence and social standing.
Green’s Detective Gryce, is thought to have been part of Conan Doyle’s inspiration for the later Sherlock Holmes, while Agatha Christie readily acknowledged Green’s influence—and for this reader it is very easy to see how Miss Butterworth could have a kindred spirit in Miss Marple.

If you like tightly plotted mysteries in a historical setting, you might want to give Green a try. I’m not sure how her Gryce books would be, but I’m certainly willing to take another stroll with Miss Butterworth—though I am sure she would not consider me fit company in a social setting.  I would just sit quietly (or not) and be amused.
Posted by BPL Ref at 10:26 AM