Little Girls in Pretty Boxes: The Making and Breaking of Elite Gymnasts and Figure Skaters by Joan Ryan 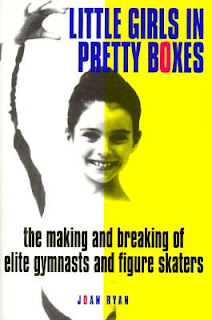 Back in 1995 when this book came out, a fellow Olympics enthusiast recommended this book to me.  She said it was well written and quite the eye-opener.  I managed to keep putting it on the back burner, though, until twenty five years later when Book Bingo had the dreaded “Read a book about sports” square.  Figuring the book would be quite dated by now, I decided to give it a try nonetheless.

Ryan details the lives and careers of a number of female gymnasts and skaters (primarily gymnasts) who made it to the elite training schools of Bela Karoli, Al Fong, Steve Nunno, and others who specialize in producing Olympic champions.  The question is, but at what cost?  The recent headlines about Dr. Larry Nasser who is now serving time for sexual abuse reflect just a small part of what goes on; the mental abuse heaped on the girls, along with the punishing physical demands, can destroy lives. It’s common for girls to be bulimic and anorexic as they try to achieve the perfect body type; the book documents the death of one girl from anorexia. They’re expected to perform flawlessly with broken bones and after surgery to repair previous injuries.  They gulp pain killers to get through it all, lest they be dropped from the roster, which means that their hopes of achieving fame, glory, and endorsements would be lost.

The latter can be especially important to girls whose families have sunk most of their available resources into lessons, costumes, choreography, and travel, which can cost hundreds of thousands of dollars.  Many times the girls have to move away from family to train full time, and I do mean full time: often they will train up to six hours a day, six days a week.  Most have to drop out of school and do correspondence course or use tutors. They carry not only the weight of their own hopes and ambitions, but those of their parents.

And I keep referring to these athletes as “girls” because that is what they are.  This was the most shocking part to me, though on one level I knew it already.  In 1976, the U.S. Olympic female gymnasts were on average 17 ½ years old, weighed 106 pounds, and were 5’ 3” tall. That’s young and small, but by 1992 the average was 16 years old, 83 pounds, and 4’9” tall.  These children begin training young, before they are old enough to start elementary school, and are impressionable enough to want only to please their coach and their parents. Their training regimen is designed to keep their bodies small and prepubescent; one former gymnast did not menstruate until she was 25.

A little checking online brings up some dispute of the allegations, with some saying there isn’t evidence that the tiny stature and stringent exercise has a lasting effect.  Gymnasts are small because this is a sport where small excels.   There have been some improvements.  The Olympic regulations now stipulate that a female gymnast must turn 16 within the calendar year to be able to compete, so at least there should not be any 14 year olds (though the age of some Chinese athletes has been questioned.) Aly Raisman, who competed for the US in 2016 was an elderly 22.

And there are also signs that things haven’t changed.  In an interview with The Washington Post, 2012 women’s coach John Geddert was quoted as saying, “Without sounding condescending to young women, this is a little girl’s sport.  With their body changes and the wear-and-tear everybody goes through, once they become women, it just becomes very, very difficult.”

Just as I was finishing the book, it was announced that a twenty year old Russian figure skater had died, apparently from suicide.

The book was easy to read, and I found it to be quite the page turner.  It was also a trip down memory lane as I hadn’t thought of some of these names in a long time.  The Nancy Kerrigan-Tonya Harding episode is covered, though not in exhaustive detail, and some of the named up and coming skaters and gymnasts have come and gone (Kristi Yamaguchi, Debi Thomas, etc.) I do recommend it to anyone with an interest in sports.  It certainly gave me a lot to think about.
Posted by BPL Ref at 11:10 AM