How to Argue with a Cat by Jay Heinrichs 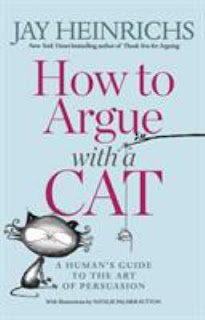 My disappointment that this is actually more of a book on how to argue with humans because a cat is going to win every time was eased by several facts: one, that the first chapter opens with a quotation from one of my favorite authors, Bob Tarte (“They’re exactly like us, minus our useless mental power and thumbs”); two, that he differentiates between arguing and a fight; and three, that he offers practical suggestions.

Heinrichs makes it clear to the reader from the start that outcome is the important thing.   What do you want to accomplish by the argument?  Most of the time, we want to persuade (or purrsuade, in keeping with the conceit of the book) the other person to do or to believe as we would like without having to resort to putting the person in a headlock.  He offers tips such on how to fit into a group, how to defuse a tense situation, and how to avoid fallacies.
The humorous aspect of arguing with his cats lets him explain the ancient rules as laid out by the Greeks in a painless and fun manner. He demonstrates the practical uses, from talking your spouse into going to a concert instead of staying home to how to avoid being manipulated.  For the latter, he advises asking questions. Statements that begin “They say…” need to be clarified.  Who is “they”? What qualifications or expertise do they have to offer this opinion?  “They say that chocolate is good for your heart” means more if it comes from a cardiac specialist and not, for example, a Hershey’s salesman. Heinrichs just wants you to stop, think, and ask.

I enjoyed this little venture into the civilized way of disagreeing without being disagreeable.  The cute illustrations and the author’s light-hearted approach complement each other. This is a good introduction to the fine art of persuasion.
Posted by BPL Ref at 10:00 AM

Email ThisBlogThis!Share to TwitterShare to FacebookShare to Pinterest
Labels: argument, discussion, How to Argue with a Cat, Jay Heinrichs, Jeanne, logic, Persuasion