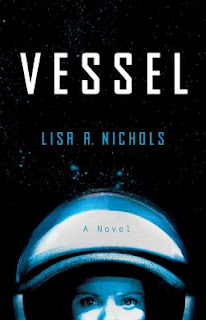 This book is described as a tense psychological thriller perfect for fans of The Martian. It isn’t. I’m a sucker for space novels. Not the technical jargon of a NASA manual, but the nitty gritty of life in space. Vessel disappointed in this crucial area. It is the story of Catherine Wells, an astronaut who mysteriously returns to earth six years after a catastrophic event decimates the crew of her ship and all are believed dead. Joy ensues, someone has returned from the outer reaches of the cosmos to tell their story! Except she can’t, or won’t—she remembers nothing and what she does remember, she isn’t prepared to share.

The majority of the story focuses on the aftermath of returning to a job and family where everyone has already accepted your death and moved on. Catherine’s husband is about to become engaged to one of her best friends and her daughter is ready to graduate from high school. Her time in space is told periodically through flashbacks interspersed throughout the drama of her return to earth. In my humble opinion, this book would have been much improved had the majority of the story been set in space where the main drama unfolds. Perhaps a prologue of her return to earth followed by her time on the ship as the bulk of the story. If I’m reading about space exploration, I want space exploration!

Sadly, this book focused more on the drama of the unexpected family reunion than on the suspenseful happenings in outer space. I stayed with it and finished the book, though the last third became extremely unbelievable (I know, we’re talking about space travel, but still…). The ending was, for me, unsatisfying and something of a let down. If you want a true space thriller, I suggest leaving this book on the shelf and reaching for The Wanderers by Meg Howrey instead. On the other hand, if you would enjoy a family drama with a little bit of space thrown in, this is definitely the book for you!
Posted by BPL Ref at 9:05 AM