A Walk in the Woods by Bill Bryson 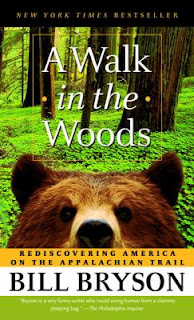 Each month, someone from the Bristol Public Library participates in the Radio Bristol Book Club and in October the book was A Walk in the Woods by Bill Bryson.  For the uninitiated, Bill Bryson is a humorous writer of non-fiction, possibly best known for his travel writing though in recent years he has branched out into other areas.  His latest book is The Body:  An Occupant’s Guide. A Walk in the Woods is an account of Bryson’s attempt to walk the Appalachian Trail.  It includes a great deal of information about the history of the AT, including possible hazards (Bryson is always interested in things that can kill him on his travels) and how to equip oneself for the trail.

I had actually read the book before, but it had been a year or seventeen ago so I felt I definitely needed to read it before the book club meeting.  I remembered how very informative it was—I had known little about the history of how the AT came to be or really how treacherous parts of it can be—and that the information had been entertainingly imparted.

What I didn’t remember is how side-splittingly funny it was.  Bryson knows he needs to have someone to hike with and after an increasingly desperate search, he finds Stephen Katz.  Katz is an old school friend of Bryson’s, albeit one he hasn’t seen in decades.  Katz assures Bryson he is good shape: “Real good.  I walk everywhere these days.” (Bryson finds out that Katz’s car has been repossessed.) He also brings along provisions for the trail—a duffle bag full of Snickers bars.

After this inauspicious beginning, the two go to Georgia to start the Trail at its southern end—the most common route—and it doesn’t take long for them to realize they may be in over their heads.

I thoroughly enjoyed my re-read of this book.  Bryson has a sharp, cynical sense of humor that some people do not like, but because he can be just as cutting about himself as others, it doesn’t bother me.  He can be very critical about people and places.

What I love most, though, is all the information that’s packed into his books.  One of my most enduring impressions from my first reading of the book was Centralia, Pennsylvania.  I had heard the name of the place, but knew nothing else: I certainly didn’t know that a coal seam that ignited in 1962 is still burning today, destroying the town. Not far away, there is a mountain so polluted by a zinc mill that all the vegetation has died, leaving a bare hill.  The contrast is particular strong after the sections in which Bryson marvels at the beauty of the AT, with its dense forests and spectacular views.

The other wonderful part of the book is more difficult to describe.  It has to do with the way Bryson describes not just the forest but the effect that being in the deep woods has on him.  It’s a transformative experience.  The grandeur of the natural world is often contrasted with the man-made world which, although filled with delights like fast-food, hot baths, and vermin free sleeping, is transitory and tawdry.  Nowhere is this more evident than Gatlinburg, Tennessee where stores Bryson saw just a few years earlier are already distant memories, replaced by newer, shinier offerings.

I loved the book just as much, if not more, than I did the first time around. 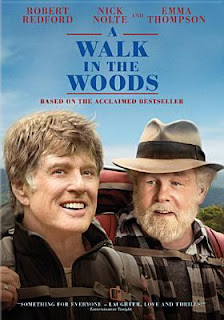 In between readings, a movie was made of the book with Robert Redford as Bryson and Nick Nolte as Katz.  I saw it in the theatre when it came out in 2015 and liked it well enough, though I didn’t remember a lot of the incidents depicted.  Re-watching it after reading the book again revealed that it did follow the events in the book but it lacked the heart, the emotional resonance that I found in the book.  There were some nice scenic views, but they seemed just that:  nice scenic views.  The frame story was altered because of the casting.  In reality, Bryson and Katz were in their 40s; Bryson was interested in the Trail and its history in part because he wanted to write a book.  Katz was at loose ends and wanted to connect with a friend.  In the movie, a much older Redford is facing mortality and decides to tackle the AT as a way of showing himself that he still has it, that he will not go gently into that good night.

I have to acknowledge that part of my disappointment with that first viewing of the movie was “what might have been.”  Redford had optioned the book for a film in 2005 with the intention of having Paul Newman play Katz.  That could have been a film for the ages! But of course Newman passed away in 2008, so it was not to be.  My second viewing left me more charitable toward the film. It is very funny, even if it is formulaic, and Nolte is wonderful as Katz.  I also applaud the expanded role Emma Thompson has as Bryson’s wife, who doesn’t get quite as much attention in the book as in the film.

I recommend both book and movie, but if you can only choose one, by all means take the book.  Your experience will be much richer.

(We have previously reviewed other books by Bryson:  Life and Times of the Thunderbolt Kid and A Short History of Nearly Everything.
Posted by BPL Ref at 10:09 AM