The Babysitters Coven by Kate Williams 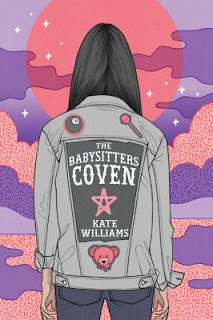 Esme is a good babysitter. Maybe other seventeen-year-olds would consider it a lame job but it’s better than working the drive-thru window, in her opinion. She even has a “club” (with her best friend Janis being the only other member) modeled after the Babysitters Club books she loved as a kid. It isn’t until new girl Cassandra arrives at their school, demanding to join the club for mysterious reasons, that Esme begins to suspect that maybe she’s not another average teenager.
The Babysitters Coven has a fun cover and premise, so I was very excited to read it. I was a little let down. Esme and Cassandra have special powers (telekinesis and pyrokinesis respectively). They both come from a long lineage of young women with special skills tasked with protecting the world from demons. Female Sitters come of age as teenagers while being mentored by older male Counsel. It sounds a lot like Buffy the Vampire Slayer. Which I guess is the point because characters in the book make the connection, and the book itself is marketed as Adventures in Babysitting meets Buffy the Vampire Slayer. Which is fine but it still felt a little lazy.
I know I’m not the target age demographic but Esme reads very young, almost middle school age. The whole book feels a little more juvenile than it needs to be, especially the text speak that is thrown into the prose as well as the dialogue. (I’m not sure anyone says “TBH” out loud?) I also hoped it would be a little more witchy. Perhaps a group of neighborhood girls become friends and discover witchcraft on their own terms – not as part of some great chosen family line. But I don’t fault the book for my differing expectations.
Though not a bad book by any means, I found it hard to stay invested at points, and ultimately thought it was a little forgettable. I think it could be a fun read for preteens, however. And hey, maybe they’ll even discover Buffy by reading it.

** I received a copy of this book from Netgalley and the publisher in exchange for an honest review. **
Posted by BPL Ref at 9:24 AM