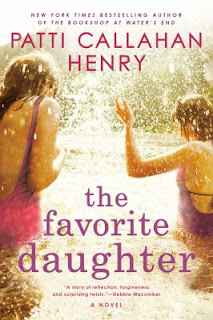 Lena Donohue left Watersend, a small town on the South Carolina coast a decade ago when her wedding day went awry. She’s made few fleeting trips home to see her mother, her father, her brother Shane, but not her sister Hallie. With careful planning, Lena has managed to avoid Hallie, her closest confidante and her greatest betrayer. But when Shane calls to say that their father Gavin’s health is declining, Lena immediately books a flight to return to the family she left so many years ago.

Gavin is well-known in Watersend. He runs an Irish-styled pub called The Lark, expertly pulling pints of Guinness and making easy conversation with locals and tourists alike. As his memories begin to fade through the haze of Alzheimer’s disease, Lena, Hallie, and Shane must band together to help him reclaim the events of his life.

With the two sisters, Patti Callahan Henry vividly shows the sharp pain of betrayal of a family member. The characters feel real, as Lena and Hallie attempt to work together for the good of their father. Hallie has moved on and made a life with her husband and two little girls. Lena has created her own life as a travel writer in New York City, choosing to be called Colleen while having loose and fleeting relationships. When she returns home, she must make a conscious decision to remain there to be a part of a family long separated.

Although Gavin is beginning to have memory issues, he is still aware of what is happening to him, and aware that he may lose more of his past and his present. Lena, Hallie, and Shane decide to create a memory book for him so that he can look back to see his life in stories and in pictures. Of course the book must be finished quickly as they are planning a birthday celebration for Gavin. This memory book is the one part of the novel that felt contrived to me, as it seemed to be a device to carry the plot along. Inevitably, discrepancies in dates and events come to light as the siblings talk to Gavin and to the people around him, creating more questions than are answered.

While I enjoyed this novel, after finishing it I realized that it has some common themes with the other Henry novel that I have read:  Between the Tides. Coastal South Carolina? Check. A young woman who moves away and must return? Check. A father who she loves but finds that she did not entirely know? Check. Just because there are similarities does not mean that I did not enjoy both books. Sometimes it’s nice to have a book that is slightly predictable. The author made me care about the characters and that kept me reading to the end. I will definitely be checking out more of Henry’s writing.
Posted by BPL Ref at 8:53 AM