If Cats Disappeared from the World by Genki Kawamura, translated by Eric Selland 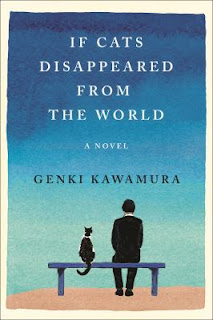 As the book opens, our narrator, a young postman, has been met with devastating news:  he has a stage 4 brain tumor and will be lucky to live six months.  Frankly, his doctor will be surprised if he makes it another week.  Stunned, he goes home to his cat, Cabbage, and contemplates his fate.

Then Intervention occurs—and it can’t be called Divine Intervention, because it is via the devil.  He has a bargain to offer: if the postman picks one thing to disappear from the world forever, he can have an extra day of life.  Simple, no?

Ah, but of course there is a catch.  The devil has to approve the choice, so making dust or roadside trash go away is not going to happen—as the devil says, “C’mon now, what do you think I am, the maid?”

No, the item has to be important.

As the narrator weighs each choice, imagining how the things fit into his life and what they mean to him and others, he reflects on his past and his relationships. Most of all, he remembers something his mother always said:  “In order to gain something, you have to lose something.”

While this is a thoughtful and sometimes poignant book, it’s also pretty funny.  The devil shows up wearing a brightly colored Hawaiian shirt and is more used car salesman than Prince of Darkness. He also likes to play jokes, as when he enables Cabbage to speak.  There are other things I’d like to mention, but this is such a slim book—about 150 pages-- that it’s too easy to spoil.

I have to say that it covers some of the same ground as the recent The Travelling Cat Chronicles by Hiro Arikawa, which I loved, but Kawamura’s work is lighter in tone. I read this one to fulfill a Book Bingo square (‘read a translated book’), which just again proves how much fun it is to expand one’s horizons.
Posted by BPL Ref at 9:24 AM