Ain't No Grave: The Life and Legacy of Brother Claude Ely by Macel Ely 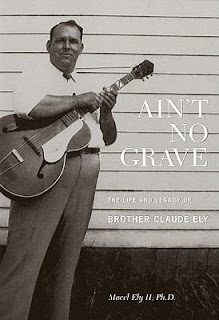 A young man from Maryville, Tennessee was browsing a record store in London, England when he realized that the music being played sounded unexpectedly familiar.  In fact, the singer sounded very much like his Great Uncle Claude Ely.  Intrigued, he went to ask the shop owner and discovered an entire display devoted to Brother Claude, the Pentacostal minister and "Gospel Ranger." Ely had recorded several albums starting in the 1950s as well as written a number of songs recorded by other artists, but until that fateful day in England Macel Ely had no idea just how influential his family's faith and music had been.

Macel's research resulted in a book, Ain't No Grave:  The Life and Legacy of Brother Claude Ely. The title comes from one of his most famous songs, "Ain't No Grave Gonna Hold My Body Down." More than a biography, the book deals with gospel music in general, a bit of music industry history, and a great deal of information about religion in our area, primarily the rise of the Pentecostal-Holiness movement.  I think it's must reading for anyone who wants to understand Appalachian religious tradition.

Of course, the music which started Marcel's quest is also central to the book.  The upbeat, fast paced music influenced a number of the early "rockabilly" singers, including Elvis Presley and Johnny Cash.  As a child, Ray Charles also attended at least one of Brother Claude's tent revivals.  Rock historian Colin Escott noted in his book Tattooed on Their Tongues  A Journey through the Backrooms of American Music that Elvis' "We Gonna Move" was a virtual note for note copy of Brother Claude's "There's a Leak in This Old Building." The book includes a chapter on Brother Claude's musical influence among contemporary singers and pop culture, including Robert Duvall's movie "The Apostle."

And Brother Claude's passing was certainly a Hollywood moment, one of those things which, if in a film, would cause skeptics in the audience to roll their eyes at the unlikeliness of it.  During a tent revival, Brother Claude was playing piano and singing "Where Could I Go But to the Lord?" when he collapsed and died in front of a stunned congregation.

The writing style is informal and friendly, but the research shows.  Macel interviewed many people for the book, which adds to the conversational style.  Personally, I always enjoy seeing places named that I'm familiar with, and such references abound in this book.  Brother Claude was born in Lee County, Virginia and preached through southwest Virginia and East Tennessee as well as parts of West Virginia and Kentucky.  A CD of music and sermons is included with the book.