Bad Blood: Secrets and Lies in a Silicon Valley Startup by John Carreyrou 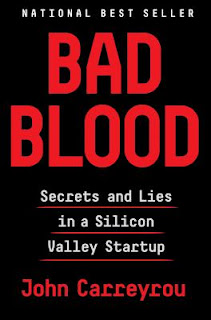 When Elizabeth Holmes was just 19 years old, she dropped out of Stanford to found a medical start up that she would later call Theranos. Her dream was to do away with the needles necessary for bloodwork and run hundreds of tests from a single pinprick from the tip of a finger. She charmed big investors (like former secretaries of state George Shultz and Henry Kissinger) into funding this dream and set out to make it a reality. She asked professors for advice and ignored the ones who told her they just didn’t think her plan was feasible. (Ignoring warnings from people with much more experience than her would become a constant pattern.) There were problems early on, and soon Holmes was lying to investors, employees, and even the public about a “break-through” medical device that didn’t even work.
Holmes’ house of cards slowing started to fall in 2015 when John Carreyrou published his article in the Wall Street Journal exposing the company for the fraud it was. Holmes tried to ride out the bad publicity but eventually the company dissolved and she and her business and romantic partner Sunny Balwani are both facing 20 years in prison for defrauding investors. Carreyrou expanded his articles into Bad Blood which is a wild showcase of corporate hubris.
It might be hard to quickly get across just what terrible people Holmes and Balwani are but I’m going to try. The most glaring example of course is the fact that their faulty devices were tested on patients thus jeopardizing their health. Some people thought their cancer had come back. One woman got several second opinions to make sure she was healthy and racked up thousands of dollars in medical debt, and I’m sure she wasn’t the only one. A handful of nurses, doctors, and patients spoke on the record for the Wall Street Journal article, and Theranos responded by harassing them with lawyers and threatening to ruin their reputations anyway they could. Balwani’s “management” style consisted of terrorizing the employees to the point of mental breakdown and instilling paranoia that forbade communications even between departments. They seemed to constantly wreak mental and financial havoc.
Though it is non-fiction, Carreyrou’s book reads like a corporate thriller. It is fascinating and truly astounding what these people were able to get away with for so long. I do wish he delved a little deeper into how Holmes was able to essentially bamboozle so many powerful and intelligent people. He does sometimes talk about her charisma but even that doesn’t feel like a sufficient answer. (She even had Shultz on her side against his own grandson, one of the whistleblowers.) Regardless, this was a surprisingly quick (and bizarre) read and really felt like a page turner. There’s supposedly a movie in the works starring Jennifer Lawrence, and I’m excited to see their interpretation.
Posted by BPL Ref at 12:55 PM