Man of Constant Sorrow: My Life and Times by Dr. Ralph Stanley with Eddie Dean

In honor of Rhythm and Roots, we are re-posting a review by Jeanne first run in February, 2010. 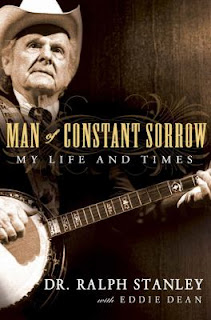 This region has long been known for the wealth of music nurtured on the mountainsides and up in the hollers. Traditional music brought over by European immigrants melded with elements from Native American and African American music to produce a unique sound. “Pop” Stoneman is credited with extolling the virtues of the region’s music to Ralph Peer, encouraging him to come here to record. Peer soon found that Pop hadn’t exaggerated: there was a lot of good music in these hills. At about the same time that Peer was making his recordings, a second son was born to Lee and Lucy Smith Stanley at their home in Big Spraddle, Virginia. The baby was named Ralph, and he and his older brother Carter would be steeped in mountain music from birth.

Such is the start of the long awaited autobiography of Ralph Stanley, traditional music icon and legend. The story is told as if you’re just sitting on the front porch, passing the time as Dr. Ralph reminisces: he tells us that he knows proper English, but he chooses to tell his story in the phrases and terms of home. I was reminded of times when, as a child, I’d hear the adults laugh about long-ago shenanigans involving outhouses or stray cows, sing bits of old ballads or hymns, pass along local lore and gossip, and speak of ghosts and faith healings and the proper way to milk a cow. Dr. Ralph would be right at home with that group, though he’s realizes that he’s speaking to a wider audience, ones who may not know , for example, the difference between Primitive Baptists and Old Regular Baptists. He explains mountain customs, history and traditions, while being neither ashamed nor condescending. He does an excellent job of describing a way of life without electricity, television and indoor plumbing.

Naturally, much of the book is devoted to the music, starting with the brothers’ early experiences in singing gospel in churches and at community gatherings such as pie suppers. Then came the gig on “Farm and Fun Time” on WCYB where the Stanley Brothers first made an impression on the region. Many of their songs became country and bluegrass standards. Carter’s easy way of working a crowd, along with his fine singing voice and gift for songwriting made him the natural leader of the group, while Ralph was shy and generally deferred to his older brother. Many believed that the “Stanley sound” would end when Carter died. It was up to Ralph to not only prove the naysayers wrong, but to determine a new course for his music, going back to “old time” mountain music rather than pure bluegrass.

Earning a living through music is rarely easy and Dr. Ralph doesn’t glamorize life on the road, with seedy bars, jealous musicians, and fleabag hotels. While there are humorous incidents, there are as many that are somber: Lee Stanley’s deserting the family when the boys were young, Carter’s early death, and the murder of a band member.

Although Dr. Ralph—and yes, the book does explain how he received that title—has been known as a man of few words, he does a fine job of telling his own story without skimping or whitewashing. Several reviewers have expressed surprise at how candid he is; he does have a few bones to pick (he didn’t care for the way he was portrayed in a play, for instance) and he isn’t shy about how he views his place in traditional music, but the overall tone isn’t self-serving. He does a bit of name-dropping (A. P. Carter, Bill Monroe, Flatt and Scruggs, Keith Whitley, Ricky Skaggs, etc. )but not nearly as much as he could have. He is generous in his praise of some musicians who really haven’t gotten their due, giving names to folk rarely credited in mainstream music history. In a few places he seems downright circumspect. He is honest about the toll the years have taken on his voice, but feels that the true emotion gathered from life experience compensates.

This is more than just a story of one man: it’s the story of a region and a time long past. Co-author Dean, a veteran writer for publications such as Spin magazine, has done a wonderful job of telling the story while keeping to the background. The book sounds as if it came straight from Dr. Ralph’s lips, without prompting or rewrites.

Several reviewers wished for more photos. I second that, and will add that an index would have been a plus, even if it did take away from the homespun feel.

I picked this book up thinking that it would be another standard celebrity biography, perhaps with a slab of cornpone on the side. I hoped there would be some mentions of this area among the name-dropping, but I wasn’t exactly holding my breath. Instead I found a book to which I could relate and one that I’ll be recommending to anyone who wants to know about Appalachian life and who enjoys a good, well-told story—even if it’s someone who covers his ears when he hears a banjo being played. I wouldn’t be surprised if Man of Constant Sorrow becomes a standard text in courses on Appalachian history and culture, but I hope it’ll continue to be read just for the sheer pleasure of hearing such an original and authentic voice.
Posted by BPL Ref at 5:28 PM