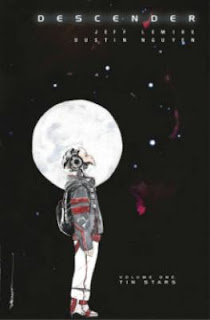 TIM-21 is an android.  Ten years ago, he was put to sleep—and never woke up.  Now, awakened, he’s discovered the universe has dramatically changed:  giant robots called Harvesters have destroyed worlds, robots are hated and even outlawed, while galactic alliances have reconfigured, not necessarily for the better.

Across the universe, the remnants of the UGC are fighting to stay afloat, while the Gnishans—a race of anti-robot, anti-technology zealots—are searching to start a war and the Hardwire, a robot rebellion, is brewing beneath the surface.  TIM-21 with his unique codex finds himself caught in the middle of it all, targeted by Scrappers who consider him dangerous and UGC soldiers who think he can help them understand the Harvesters and the Hardwire who believe he could be a savior.

I picked up Descender to mark off my “Read a Book from a Display” on BPL Book Bingo.  I liked the cover artwork and I was immediately intrigued by the premise of the book; besides which, I thought an intergalactic space odyssey might just hit the spot between reading Lonesome Dove and The Fellowship of the Ring.  Ultimately, I was glad I picked it up, because Descender is absolutely amazing.

Written by Jeff Lemire and illustrated by Dustin Nguyen, Descender is a fascinating series of science fiction graphic novels about an android.  The first volume, Tin Stars, starts the saga with a flashback to the Harvester invasion—when worlds were destroyed, and when the robot culls began in earnest—before settling on TIM-21, a companion robot in the shape of a young boy, and his journey to escape scrappers and uncover why his codex so closely resembles that of the Harvesters.

I was hooked instantly.  Although it picks up slowly in the first book, pulling together all the characters that will eventually be involved, Tin Stars sets an interesting tone that’s part dystopian tragedy and part rip-roaring space adventure.  It’s grim, but hopeful, “balancing the fear of the unknown with the spirit of adventure,” according to a blurb on the back cover.  It mingles together intricate political and social dynamics, creating a universe full of intriguing characters and heart-wrenchingly believable (sci-fi) situations.

The story is pretty complex, weaving together several different narrative threads, including TIM, Dr. Quon (the scientist who built TIM), Telsa (a UGC pilot tasked with finding TIM) and Tullis, and many others.  As the series continues, the story merely expands to include whole worlds, like Mata, an aquatic planet; or Ostrakon, a deserted planet that contains an extinct civilization; or Phages, known simply as “The Ghost World.”  The first book only brushes the surface, offering tantalizing bits of information about different worlds and the different peoples that populate them, while the rest of the series continues to give them depth.

Besides The Mighty Thor, I think Descender is perhaps the best graphic novel I’ve read all year.  It has space travel, extinct civilizations, cosmic politics, aliens and robots, beautiful artwork—I mean, what more could you want in a great science fiction story?

The series continues in:
Machine Moon
Singularities
Orbital Mechanics
Rise of the Robots

The sixth volume, The Machine War, is due out in September of this year, and I absolutely can’t wait to get my hands on it.
Posted by BPL Ref at 6:33 AM